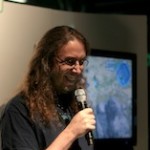 Graeme Devine is a hip guy to say the least. You should store his name somewhere in your brain: he was the co-founder of Trilobyte and did a bunch of work on the original The 7th Guest as well as other core titles like the RTS Halo Wars for Ensemble and Doom 3 for id Software. He even worked for Apple for a bit. Now, he’s doing his own thing and creating “casual” titles with his actual family.

We last caught up with him at GDC and things seemed good: in addition to speaking to the experiences he had with his Full Deck series, Devine also chatted with us about his idea for an item shop game and a fun little ARG-like title called “Super Unicorn." On his blog, he provided a fresher update on his progress on the latter.

“Well, the cat came out the bag a little with an article in the press. But yes, I’m really excited about this game,” he wrote. “I think as much as 7th Guest made something of CD-ROM that opportunity exists and is even stronger on the iPad.”

“I’ve been working on this game for many years, really, in my head. Writing bits down here and there prior to working at Apple and then since leaving having become intent on producing the real thing,” he explained. “A game that is like no other, but a game that makes you get up, go places, look, wonder and experience an adventure on your own.”

Sounds neat, right? As for how his casual games series are going, Devine seems up on them. They’re not making money because they’re free, but he is having fun with his family, and hey, that’s what counts, right?