Last month we checked out the video for Mos Speedrun [$1.99], a new platformer from developer Physmos. Mos Speedrun looked unique with its emphasis on completing levels as quickly as possible, and for its use of the ghosts from previous failed attempts running along with you in the background. Today Mos Speedrun is finally available, and it’s every bit as much fun as we’d hoped it would be.

Mos Speedrun contains 20 levels, each with 4 distinct goals to attain. There’s simply completing the level, completing the level within the specified time goal, collecting every coin in the level, and searching out and collecting a hidden skull. The different goals are a great design decision, and give reason to play each level multiple times. You can leisurely explore a level collecting coins and looking for the hidden skull, but this also gives you a chance to familiarize yourself with its layout. Once you have a good feel for a level, you can easily go back on a different try and attempt the speed run with a better idea of what to expect. 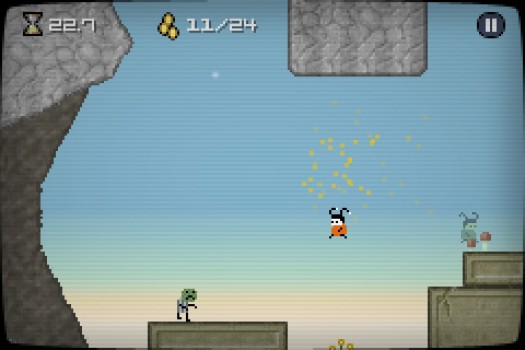 The levels in Mos Speedrun are well designed, with all the usual trappings of a typical platform game. There’s environmental hazards like laval pits and spikes as well as various enemy types which must be avoided. You can’t kill enemies, and a single touch to an enemy or hazard will kill your little guy and end your current run. There’s only movement and jumping to worry about, and in this way Mos Speedrun is platforming distilled to its purest form. There’s even extensive underwater portions, which harken back to classic Sonic the Hedgehog levels where you must keep an eye on your oxygen meter and search out bubble areas to breathe from. 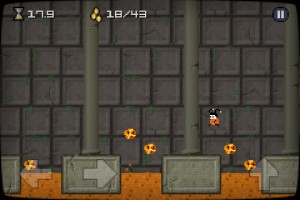 It’s actually nice to have such an uncomplicated take on platforming, but it wouldn’t mean anything if the controls didn’t work. Thankfully, the controls in Mos Speedrun are great. The default scheme is a quirky setup where you touch anywhere on the left side of the screen to move left, anywhere on the right side of the screen to move right, and touch them both together to jump. I can see the value of this particular control scheme, as with some practice it would likely offer you quicker reaction times than standard virtual controls. Personally, though, I just could not wrap my head around it.

My much preferred control scheme is a simple virtual button setup, with left and right arrows for movement and a single button for jumping. This scheme works great, and approaches the tightness and responsiveness of the current King of platformer virtual controls League of Evil [99¢/Lite]. My one small criticism is that I feel the area around the jump button could be enlarged, as I occasionally will fat-thumb it and miss the button altogether, but it’s not really a huge issue. 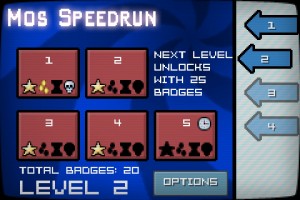 The only other negative I can think of for Mos Speedrun is that there just isn’t enough of it. The first half of the game won’t take long to breeze through, including earning every goal for each level. The second half of the game ramps up quite a bit in difficulty though, and while you’ll likely be able to at least complete each level doing so within the required time limit will be a real challenge. Still, I can’t help but wish for more levels, and the developer has confirmed that more are on the way in future updates. There’s also the ability to unlock special levels by visiting certain links through the Safari browser on your device, but I haven’t had a chance to try out this feature yet.

Another point about Mos Speedrun is that while the ghost aspect is a neat idea, I didn’t really feel like it added anything to the game and in fact found them to be distracting most of the time. They can be turned off, but I’d like to see options for seeing just the ghost for your current best run or maybe even a single previous attempt rather than all of them at once. Some players in our forums really seem to enjoy the ghost aspect though, so your mileage may vary with this particular feature.

Mos Speedrun is definitely another solid entry in the iOS platforming genre. The levels are interesting, the controls are spot on, and the game uses adorable pixel art graphics and an awesome chiptune soundtrack. Plus, despite not having a huge number of levels, the ones that are there will put up a good fight and are a joy to play through. If you’ve found yourself enjoying the many other platforming games in the App Store, and you’re intrigued by the speed run aspect and the retro style of this title, then don’t hesitate to give Mos Speedrun a try.