The match three section is arguably the most overstuffed virtual aisle of the App Store, second only to Doodle games, and more recently, Angry Birds knock-offs. Regardless, developers keep making them, I keep trying them, and rarely do I find one that I’d play over match three staples like Bejeweled 2 [99¢]. Dungeon Raid [$2.99] is a rare exception to this, as it not only has solid matching gameplay with a clever twist, but it also has entirely too many things that I like in video games, making it incredibly hard to put down.

Dungeon Raid begins with you inputting your character name and selecting a difficulty. Don’t worry if you can’t come up with a good name, the game will suggest tons of random names that fit wonderfully in to any fantasy setting. From there, you’re greeted with one of several random introductions to the game explaining how it is that your character has come across this dungeon. These intros are awesome, so I highly recommend actually reading them instead of instinctively mashing buttons to make large blocks of text go away. (I think we’re all guilty of this on some level.) 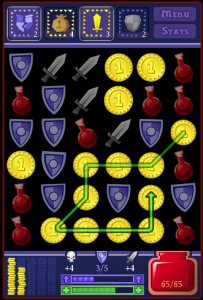 The matching component of the game is quite similar to Azkend [$2.99 / Lite] (Which is another fantastic matching game.) in that instead of swapping pieces around like Bejeweled, you draw chains of similar blocks with your finger. These chains can go any direction, including diagonally, often resulting in massive board clearing matches. In fact, with only five types of blocks, huge chains are quite common.

By now you might be scratching your head wondering why I’m piling shovels full of praise on to a matching game with a matching component that’s so simple that it usually doesn’t take much skill to clear half the board in one move. Well, it’s because of the layer on top of all this that makes Dungeon Raid the game that stole my entire day today. You see, each match you make serves a purpose, and deciding what you’re going to match when seems to require quite a bit of strategy, and often some luck, as you never know what’s going to replace the blocks you just cleared.

Strategy comes in to play because while Dungeon Raid may initially appear to just be a simple matching game, there’s a fairly complex subset of RPG elements that drives everything you do. Enemies are represented by skulls on the game board. “Killing" an enemy involves matching skulls with enough swords to total up more damage than their hit points (which is displayed to the right of each enemy). After every match, every enemy on screen damages you, and special enemies also appear randomly which have increased hit points and other special abilities. One such ability involves their attacks “poisoning" you, at which point you take constant damage until you match healing potions. (Matching healing potions, as you can probably guess, heals you.) 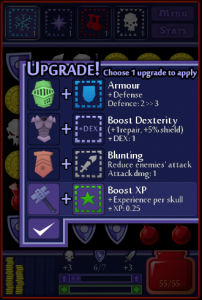 Each skull cleared awards experience. Earn enough experience, and you level up, getting the option of increasing two of your character’s attributes. These range from random active special abilities usable with cooldowns, or just flat out increasing your statistics which passively boost how much you’re healed, how much damage you do, and things like that. Matching shields repairs your armor, and adds to a upgrade bar. Once your armor upgrade bar is full, you’re given the option of improving one of your items, imbuing it with magical properties to increase your health, experience earned, or other effects. Having your armor repaired reduces the damage you take from enemies, so it’s important to keep collecting shield blocks regardless.

The last type of block is the coin block. Clearing coins adds cash to your coin purse, and with enough coins saved up you’re able to buy brand new items with better statistics than your old items. Also, matching health potion blocks when your health is full does nothing, and matching swords by themselves without skulls also serves no benefit aside from clearing our unneeded sword blocks from the game board. Matching more than three of a particular block gives a bonus, potentially allowing you to collect more of whatever resource it is your matching. 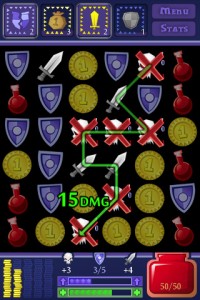 The game is over when your hit points reach zero, and while Dungeon Raid initially starts fairly simple, the more you play the more intense it gets. For instance, when faced with an entire game board full of skulls (often with special enemies as well) and you’re forced to figure out whether you’ve got enough health to handle taking damage for a few turns while you clear blocks to set up a massive skull-slaying chain. Alternatively, you could dispatch the skulls in smaller groups, which potentially would allow you to take less damage and sneak some healing if you’re lucky enough for the skull blocks to be replaced with healing potions. Or, assuming they’re not on cooldown, you could bust out whatever special abilities your character learned while you leveled up.

Each play through is different too, as the items, abilities, and equipment upgrades you’re offered are completely random. One game it might make more sense to play as more of a wizard-type character, focusing on training up active abilities with each level. Alternatively, on another play of the game you might find yourself constantly increasing the raw statistics of your character, focusing on damage, defense, or a balance of the two. Some abilities seem quite powerful, such as one that increases the effectiveness of healing potions. If you have access to this ability early in the game, it can substantially alter how you choose your matches since you can let skulls stay on the game board a little longer as completely healing yourself is as simple as popping that ability off and matching some potions.

The variety and depth of gameplay is just insane for a game, which at the end of the day, is just a simple match three with an entirely too clever RPG layered on top of it. Hell, I don’t think I’ve ever been able to bust out a 1,000 word review on a match three, and that’s saying something. Dungeon Raid is an effortless recommendation. It boasts a tutorial that is incredibly approachable, making the game appropriate for even the most casual of puzzle gamers, while offering a top-end that’s full of strategy, a bit of luck, and an entire trail of character development decisions. In other words, download this game now.