Someone is listening when I pray. The other afternoon, 2D Boy flung some awesome news one the Internet, confirming that World of Goo [$4.99] is indeed coming to the iPod Touch and iPhone, And it’s coming, like, real soon, according to a post on studio’s blog that explains, additionally, that the title is worming its way through Apple’s approval process at the moment.

Before you get all stupid-happy, check what generation your device is. In the reveal post, 2D Boy warns that World of Goo will require 3GS or better, or in iPod Touch terms, a 3rd Generation Touch or newer. Certainly, this design decision will cut a few of you out of the fun, but I’m sure it’s all for the better, as World of Goo will be poised to remain a visual treat in addition to being a great physics-based puzzle game. Oh, and if you already have the iPad version you’ll get this for free. World of Goo will become a Universal App. 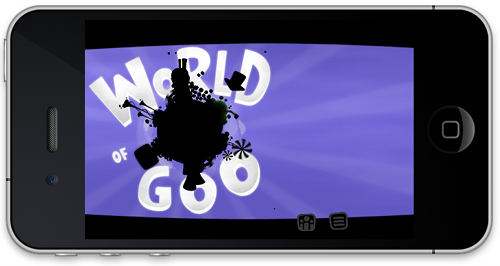 As for price, you’re looking at standard premium-ish pricing: 2D Boy has gone on record stating that the game will be sold at $2.99 in the US. HOWEVER, for the first 24 hours, the studio will submit to the race to the bottom mentality and price the title at a measly 99 cents, or the same price you pay for a succulent McDonald’s cheeseburger.

I haven’t seen this version yet, but it’s hard to imagine it’ll be a mediocre offering. The iPad version blew my and my fellow staffs’ minds in regards to how well it was catered to the touch tablet, so chances are that this version will cater to the smaller devices seems good. We’ll let you know, for sure.