Back in January, we reviewed Grim Joggers [$1.99] from 10tons Ltd and found it to be a unique take on the endless runner genre. In Grim Joggers, you control a team of 15 joggers all running in line at once. Minding all the different joggers while jumping various deadly hazards and bottomless pits proved to add an interesting dynamic to the gameplay. The goal is to survive for as long as possible while hitting checkpoints along the way that will increase your multiplier and ultimately add to your final score for each run. 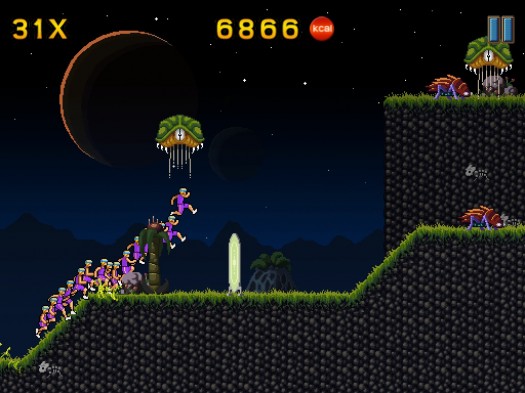 We liked Grim Joggers quite a bit when it released, and just a couple of weeks later 10tons sweetened the deal by updating the game with a brand new level and additional Game Center achievements. Now, several weeks later, they’re back again with another update for Grim Joggers. Much like the last update, a new level has been added called Alien Aerobics which features one of the more unique gameplay elements in the game.

In Alien Aerobics, there are the standard ground hazards to be avoided as well as a number of airborne baddies to look out for. Then there are these teleport doors spread throughout which will suck up members of your crew if you happen to run through them. What’s interesting is that there are accompanying teleport spheres that when touched will relinquish all of the joggers who were previously lost to the teleport doors, adding them back into your group. It’s a pretty crazy mechanic, and can really help out when you’re running low on joggers deep into a level.

In order to unlock the Alien Aerobics level, you’ll need to have the Dog Tag Collector achievement from the previous new level, Battlefield Bodybuilding. Also, included with Alien Aerobics is an additional 6 new achievements to earn that are associated with this level. I think what I like so much about Grim Joggers, aside from controlling multiple characters, is that each of the 5 new levels feel quite a bit different from each other, which is really evident in this latest update.

Players are really digging the game in our forums, so be sure to take a look at Grim Joggers if you’re in the mood for a novel take on endless runners, or if you already have the game then grab this latest update to check out the new Alien Aerobics level.