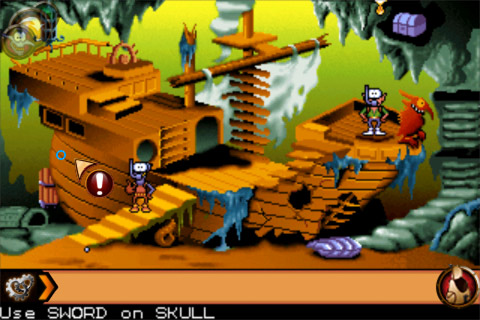 A few weeks back we profiled a few upcoming titles from retro revival studio DotEmu after our meeting out at GDC 2011. One of the titles they had in the works that wasn’t on our list is an iPhone port of the early ’90s point-and-click puzzle adventure Gobliins 2: The Prince Buffoon [link], which launched in the App Store this morning, published by Bulkypix. Goblins 2 is the second title in Cocktel Vision’s original four-part series to come to iOS, the first, Gobliiins [link], having arrived back in November.

Originally released for the Amiga and Atari ST, Gobliins 2 puts you in control of two different little goblins, each with his own set of abilities, on a quest across the colorful landscape to rescue poor Prince Buffoon.

The King’s son, the Prince Buffoon, has been kidnapped by the evil Amoniak. What else is there to do but to call upon daring adventurers, ever ready to confront greatest evils in the name of honor and thus to save the Prince? Two talented gobliins volunteer to take of this grave task. FINGUS is a serious, polite and careful little fellow. WINKLE is an oddball and a joker, cheeky and reckless. They go seeking Tazaar’s help in order to find the Prince. It is your job to help them on their way. 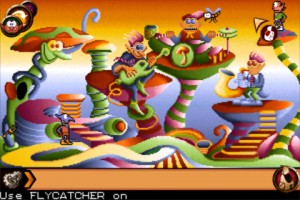 The game is divided into various sections, each containing a few different scenes. In order to move from scene to scene you must determine how to best interact certain marked items on the screen to solve that scene’s puzzles. And, these puzzles are, for the most part, highly challenging. An example from very early in the game is the need to have one goblin steal a bottle of milk while the other goblin distracts the village onlookers by attempting to steal a sausage. In this example, timing is important, but it’s not the case with every puzzle in the game.

The interface for Goblins 2 has been entirely reworked for the iPhone, and is an improvement over the control system of the earlier Gobliiins for iOS. You move an onscreen pointer about the screen, tapping on items to send your goblin over to interact with them. A button at the top of the screen switches focus from one goblin to the other, while a menu bar at the bottom offers access to your pack, as well as several levels of hints available for each scene. The whole thing just feels a bit more ideally adapted to the platform than the first release.

Gobliins 2 was well received when it was released back in the early ’90s, in large part due to the witty scenarios presented and the amusing personalities of Fingus and Winkle. It’s a humorous game with wild, colorful scenes and a jaunty audio track, but you’d do well to remember that it is a point-and-click adventure from decades past and, as such, lacks some of the flourishes we’ve come to see in such titles as they’ve evolved over the years. Certainly, for any fan of the original series, Goblins 2 is a no-brainer buy, but I’d doubt its appeal ends there.