Big Pixel Studios first cut their teeth in the App Store with Piyo Blocks [99¢/Lite] and its sequel Piyo Blocks 2 [99¢/HD], two highly underrated games and easily my favorites among the many, many match-3 games available. They then moved on to a more ambitious project, the wacky dual-stick shooter Meow Meow Happy Fight [99¢/HD], which we really enjoyed back in August when we reviewed it. With their library of titles thus far, Big Pixel has proven is that they are very capable of making games that feature solid gameplay, cute characters, and a colorful visual style.

This rings extremely true in their latest effort Land-a Panda [99¢/Lite/HD] as well. In Land-a Panda your goal is to get the male panda Yang Guang reunited with his sweetheart Tian Tian who is waiting at the end of each obstacle-filled level. You accomplish this by shooting him across the levels using a series of cannons, avoiding all manner of hazards along the way and trying to collect 3 coins on each stage for maximum scoring. If you remember any of the barrel blasting sequences from the Donkey Kong Country series, Land-a Panda is like an extreme homage to these. 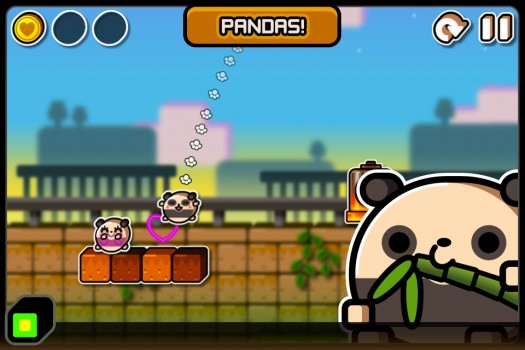 There are 4 different worlds in Land-a Panda, each containing 20 levels, with an open spot for additional worlds to come in future updates. With 80 levels, there is a lot of gameplay here. The levels ease you into the mechanics in the game, starting with cannons that will automatically align to the proper angle and fire you in the right direction. As the game progresses, trickier cannons are introduced like ones that rotate and move back and forth, requiring you to fire at the correct time in order to launch to the next cannon. Enemies and environmental hazards like spikes add to the difficulty as well. 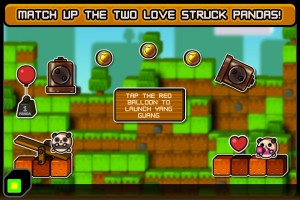 All of these elements blend together really well in Land-a Panda. Each level is like a puzzle in how you must figure out the best route to complete it, but the moving platforms and precision firing add a fast-paced component to the gameplay. If earning the highest score possible isn’t a big deal to you, then you’re free to take your time with each level and wait for the proper time to fire each of the cannons, which should suit you if you’re typically more of a casual player.

Another big part of the game is predicting the trajectories of your cannon shots, which is something that has been attributed to the allure of games like Angry Birds. I think there’s something to this theory too, as there’s really nothing like firing your cannon and the exact right time to launch Yang Guang in a perfect arc up and over a set of spikes, narrowly between a set of enemies on the way down, and landing squarely next to his darling Tian Tian. One huge draw to Land-a Panda is that it’s incredibly fast and simple to retry a level, so it’s easy to experiment with different methods or endlessly retry a level in the hopes of topping your highest score.

Land-a Panda takes the simple concept of firing from cannon to cannon and builds a wealth of highly replayable content around it. Completing all 80 levels will take some time, and earning 3 stars for each will keep you busy even longer. Then, you can go back and perfect your techniques to earn higher scores and compete on the OpenFeint and Game Center leaderboards. And of course, this is all done using the lighthearted sights and sounds that Big Pixel are known for, with graphics that are crisp, colorful, and Retina Display ready. Players in our forums have been enjoying this game a ton, and if you’re in the market for a cleverly designed physics puzzler with a great sense of style then you can’t really go wrong with Land-a Panda.