Blanket statements are usually reserved for the uninformed, but I can safely say that I haven’t liked a single boxing game in the App Store up to this point. Some of them have admirable qualities, but the vast majority either make me long for Super Punch Out or Fight Night on the PS3. It turns out that all I was waiting for was EA’s masterful Fight Night Champion [$4.99].

What makes Fight Night Champion so satisfying is that it never strays too far from its console roots, but at the same time does a great job embracing the touch screen technology for combat and the accelerometer for movement. Like the console, the control system in Fight Night Champion works by splitting the control system into quadrants. Where on the console you pop the stick up to do a high jab, here you just have to tap the upper half of the screen. The same goes for the low right hook, where all you have to do is swipe from right to left on the lower half of the screen. Every punch, grab, and hold, from the simple bob-and-weave to each boxers signature punch is done via easy to follow gesture controls, and once you get a round or two in you’ll be ready to punch with the big boys. 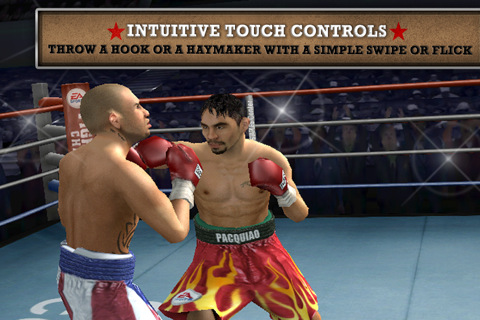 In addition to the slick fighting, Fight Night Champion comes loaded with 20 boxing legends, from Mohammed Ali to Manny Pacquiao, and also lets you create your own boxing fantasy in the Legacy Mode. I don’t know about you, but taking down the amateur hour fighters in record speed with my ripped heavyweight doppelganger sporting American flag shoes ranks right up there with fried PBJ’s and Thin Mint cookies. Hop on a multiplayer match over bluetooth or local WiFi and you’ll find yourself in iOS gaming bliss… which I guess would taste something like an A1 Thick ‘n Hearty Burger. 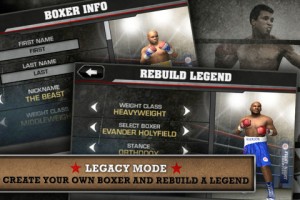 As killer as the game is though, there’s always room for improvement. My first complaint (and this seems to be echoed frequently in the forum) is that the parrying system is unnecessarily hard. I’ve nailed a few counters in my play, but my fights tend to become brawls with very little blocking (not that I play any different on the console version). I would also love to see the Legacy Mode flushed out a bit with some interactive training sessions and maybe a cutscene or two, or perhaps a pre-fight Rocky montage to really pump me up.

The bottom line is that if you are a boxing fan, and especially a Fight Night fan, Fight Night Champion is a must have app. The controls are outstanding, the boxer selection will please any boxing fan, and the ability to create your own boxer and start your own career is gold. If you ever find me in a restaurant or airport and want to take me on in a bluetooth match, you’re on. As Drago would say, “I must break you."