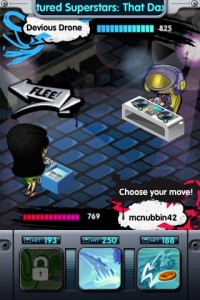 During GDC this week, I met with developer Booyah! to check out their upcoming game Nightclub City DJ Rivals. DJ Rivals is a hodgepodge of many different gaming ideas, but essentially it boils down to a rhythm-based game with RPG elements. Booyah! has previously brought the casual social game MyTown [Free] to iOS and are responsible for the mega popular Nightclub City game on Facebook, which DJ Rivals is loosely associated with.

Typically, I’m not really a fan of casual social games or Facebook gaming in general, so it would be very easy to dismiss DJ Rivals because of that. But one of the great things about an event like GDC is that I was able to sit down face to face with Booyah! and actually try out the game myself, and was really surprised by how much I enjoyed it.

In DJ Rivals you will choose locations throughout a city to partake in rhythm-based battles against rival DJs. These locations can be culled from Google Maps information and will actually populate the buildings in the city with the actual locations, which I thought was a fun touch. 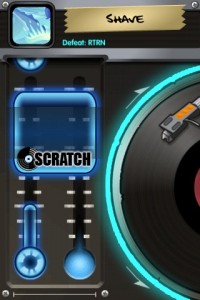 Each location will have drone DJs which you can battle to level up your character and earn money. You can then purchase a ton of different items like new DJ tables, clothing items, and special moves. You can also become the “House DJ” at a location by continually winning battles there, much in the same way you become the “Mayor” of a place on Foursquare. Other players can then challenge you for House DJ and will battle a ghost of your character that contains all the stats and moves you’ve accumulated, and you can battle and take over House DJ status from other players as well.

The actual battle mechanics are quite fun in DJ Rivals. You will unlock 50 moves over the course of the roughly 30 quest storyline, and can equip 3 of these moves at a time. Choosing a move will trigger a rhythm-based sequence where you tap to the beat on two lanes of notes and scratch a record when prompted. How well you do during this sequence determines the damage you will deal for that particular turn in the battle. This continues until you or your opponent’s life bar is depleted.

With all the different elements in Nightclub City DJ Rivals, there should be plenty to do for people who enjoy leveling up and building a character, collecting tons of items, and playing rhythm-based battle sequences. I really liked being able to import real life locations from anywhere in the world into the game, and thought the battling mechanics were really fun.

While I might normally have glossed over DJ Rivals as just another casual social game, after actually playing it I’m actually looking forward to putting some time into it when it launches next week on March 10th.