Touch and swipe are what iOS games do best. In my opinion, focusing on these two native user inputs often spawn the best design in iOS games.

These are the two thoughts that hit me as I went hands-on with a demo of MecaPix at GDC in San Francisco yesterday afternoon. It’s sort of looks like Tetris with a touch of Space Invaders. And it’s also a game with no virtual d-pads or buttons — just touch and swipe, the bread and butter of the iPad and iPod Touch.

In Tetris, the idea is to organize descending blocks into piles. In this game, the idea is to draw and fire off ascending blocks (with your finger) in order to clear falling blocks before they reach the bottom of the screen. It’s a unique, simple idea that plays off the familiarity we all have with the classic puzzle game, Tetris. It’s even got that retro look and similar shapes. Check it out. 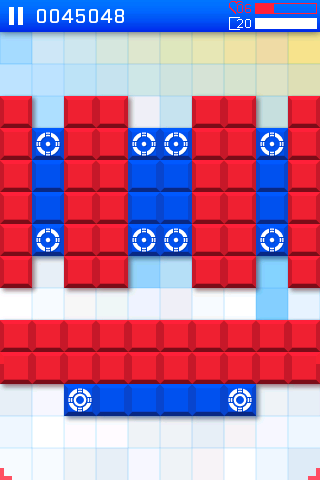 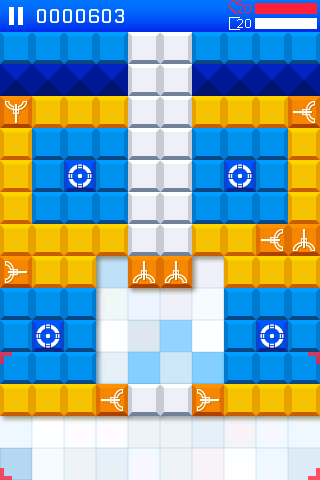 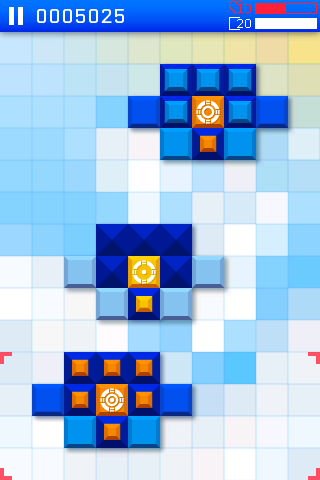 But there are twists. For example, some descending block patterns have special abilities packed within their constructions. Bombs can be placed in the middle, and when you hit the bomb, the entire patterns clears. Other patterns have laser blocks that fire adjacent blocks at other constructs falling down at the screen.

So, the idea is to be precise and hit the blocks that matter. There’s an ammo counter that keeps you from firing blocks wholesale. Otherwise, you could theoretically just build massive lines of blocks that would eliminate all enemies.

MecaPix mixes things up with classic puzzle elements, creating a cool balance between basic trigger-finger play and thought. One level, one out of around ten in the stage, forced me to consider each of the special blocks in a descending pile and pick the best ones to kill the construction before it reached the end of the screen. It’s a neat change of pace.

Precision, and therefore conservation, is rewarded with points. And so are combos. As you anticipate and shoot blocks in the right place, points skyrocket.

There’s a lot more to the game that I didn’t get to play directly, but demonstrated the amount of depth to be had. There are boss battles, for example, that have you attempting to reach the heart of a tumbling monster. There’s also a cool level that uses the classic game Snake as its inspiration. The falling blocks in this level resemble the Snake and squirm, keeping you from drilling the heart without thought.

Mecapix is being built by Robotalism Games, a developer out of Paris. The plan is to launch the game is as soon as they possibly can and at an agreeable price point: a mere .99 cents. From what I saw this afternoon, this might be a very special game. I’ll be keeping my eyes on it, for sure, as it combines unique and possibly deep play with the two things that spawn the best games: touch and swipe.