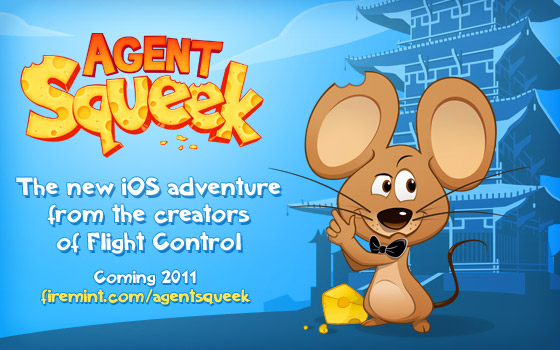 Play as Agent Squeek, the dashing and debonair undercover mouse. Outsmart ferocious felines and crack fiendish challenges! Sneak, sprint and strategize in your quest to save every precious piece of missing cheese.

Firemint is an Australian game company that has seen a massive amount of success for the iOS platform. They made headlines early in the life of the App Store with their ambitious Real Racing title. But even before Real Racing ever launched, they saw the surprise success of Flight Control which kicked of the entire “line drawing" genre for iOS.

We know there’s been a lot of pressure to see what their next original game would be, given the success of their previous titles. We’ll have some hands on time with Agent Squeek later this week at GDC 2011. In the meanwhile, they’ve set up a Facebook Page for the upcoming game.