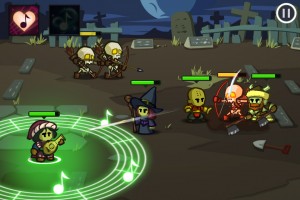 I had absolutely nothing but good things to say about Battleheart [99¢] in our review when it was first released. It’s an entirely multitouch controlled real-time RPG battle game, which pits your varied party of four adventurers against many different types of monsters and bosses.

Battleheart takes traditional RPG elements found in party-based RPGs and even to some extent MMORPGs and boils them down to their essence. At its core, gameplay consists of managing a four member party through various battles. There isn’t really any story to speak of aside from random flavor text describing characters and levels, characters only have four equipment slots, and there’s only two statistics for each class to even worry about. In my early time with the game the latent RPG power gamer inside of me initially thought that how simple everything initially seems to be was a significant drawback, but oh, how wrong I was. …Read More

Battleheart was just featured by Apple as the game of the week on the App Store, and in response Mika Mobile has dropped the price of their game to 99¢ for a very limited time.

If you were waiting on picking up Battleheart for whatever reason, now is your chance to pounce. Since its initial release it has been updated a few times with various tweaks and fixes. Don’t miss this game while it’s 99¢.