If you’ve been following TouchArcade, you’ve seen that we’ve been closely keeping up on Gameloft’s Sacred Odyssey: Rise of Ayden [Free] since before it even had a title. Early on we suspected it to be an action oriented game with Zelda-like mechanics, and that turned out to be true. I also mentioned that I’ll play any Zelda game and any game that vaguely resembles a Zelda game without issue, regardless of how good or bad it is. So, I’ve fulfilled that blood oath by spending a ridiculous amount of time yesterday and today powering through Sacred Odyssey: Rise of Ayden.

Before I get carried away, it’s probably a good idea to discuss Gameloft’s new approach to how they’re selling their games now. They’re labeling it “freemium", which seems to differ from everyone else’s definition of the word. Instead, it seems more along the lines of a demoware, with the rest of the game available via a single in-app purchase. Basically, now instead of a paid and lite version of the game, there’s a single version. In Sacred Odyssey, you’re able to play through the first few missions (which more or less amounts to the tutorial) and get a good handle on what’s coming in the rest of the game. This takes about 15 minutes. After that, a screen comes up asking you to make a one-time in-app purchase of $6.99 to continue. 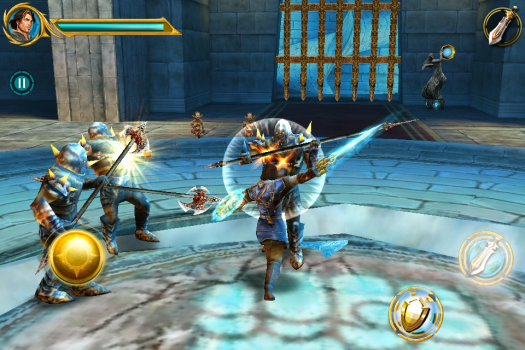 Reactions on our forums have varied wildly from people who think this is an interesting approach to people frothing with rage. Personally, this kind of thing is what I always hoped for when I first heard about in-app purchasing coming to the App Store. The benefits of this are massive. Instead of downloading a lite version, getting 15 minutes in, hitting the end of it, and downloading the full version only to do that 15 minutes over again you can just keep on truckin’ after making your IAP. It also helps to remove clutter from the App Store since separate lite and paid versions of Sacred Odyssey aren’t needed. Sure, the download size may be a little bigger than your average lite version, but you’re actually saving time and bandwidth by not needing to download a second game if you decide you like it.

The opening of Sacred Odyssey: Rise of Ayden takes a cue from many other RPG’s and begins with a dream sequence where a mysterious princess is calling out to you. After doing some dirty work around your village, you start off on your adventure, and believe it or not actually end up meeting this mysterious princess inside the first 15 minutes of playing the game. She sends you off on your first task which involves visiting the first dungeon, snagging your first piece of loot, fighting the first boss, and discovering that you’re not just some mild-mannered townsperson– You’re a grail seeker. You then return back to your home town only to find it ravaged by orcs and burnt to the ground. From here, the plot takes a curious turn down Star Wars street, and if this cut scene doesn’t remind you of Luke returning to Uncle Owen’s farm on Tatooine, nothing will. 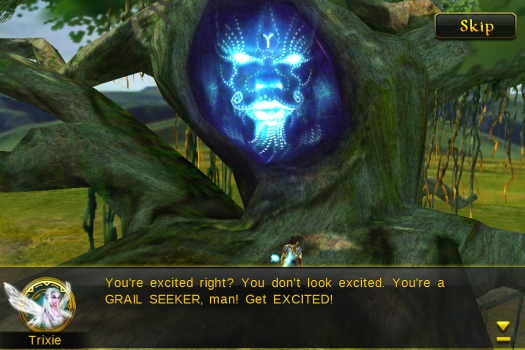 This brings me to my first issue with Sacred Odyssey— It’s like the writers couldn’t really decide if this is supposed to be a serious fantasy game, a pop culture parody game, or a comedy game. Dialog varies wildly from heavy-handed RPG cliches of foretold prophecies, to your fairy companion telling you that a mythical sword of the gods is “uber-sharp" and “begging to slice and dice". Meanwhile, you’ve got two horses, “Miya" and “Moto." It feels incredibly disjointed. The good news is, Gameloft’s voice acting seems significantly better than previous offerings, so even though dialog is cringe-worthy at times, at least it’s voiced well.

Solid dialog and plot lines have never been Gameloft’s strong points, but thankfully, the actual gameplay in Sacred Odyssey is awesome. The game is controlled using a virtual joystick and variety of virtual buttons. Like most Gameloft games, these are all completely configurable, although I’ve had no issue with the defaults. Fighting works well, and unsurprisingly has a Hero of Sparta feel to it, with virtual buttons for swinging your sword as well as blocking or dodging if you hit the block button while holding the virtual joystick in the direction you’d like to roll. Combat is actually really fun, and you’ll often find yourself in situations where you’ll need to be evasive and defensive instead of just mindlessly mashing your attack as if it were an “I Win!" button. 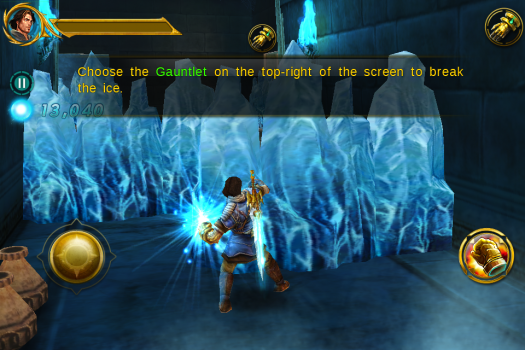 Progressing through the main storyline involves taking various quests, which inevitably lead you to people who have other quests, and then eventually a dungeon. These dungeons often have puzzles which much like other Zelda-esque games involve sliding blocks around or using whatever item you just received to overcome obstacles. Of course no dungeon would be complete without loads of bad guys, and a massive boss at the end, two things you’ll also find in Sacred Odyssey. Boss battles are a lot of fun, even though they can sometimes feel like going through the motions of “Oh hey, I just got this ability, time to use it over and over on this dude until he dies," but that seems to be the case for any game following this formula.

Aside from the main quest line, there are an ample amount of side quests too, although none of them that I’ve come across have been particularly engaging or offer good rewards. Still, it’s cool that they’re there, as they provide a bit of a distraction from just running from dungeon to dungeon. Along the way you’ll also collect blue orbs, as seemingly everything spews them. These are used to purchase things from a vendor who follows you around. You can buy everything from simple potions, to potions that heal a larger amount of life, to extremely expensive power-ups. 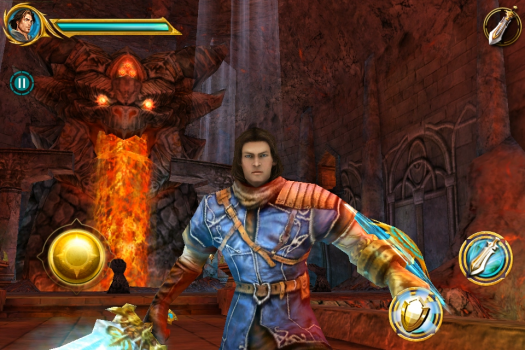 While Gameloft isn’t treading on any kind of new or original territory (as at times, Sacred Odyssey feels like a direct carbon copy of Zelda, Darksiders, or both) but there just isn’t anything else like this on the App Store. We’ll likely never see a real Zelda game either, so I suppose I don’t really mind playing Gameloft’s “highly inspired" version of it. If you love Zelda-style games, this isn’t one you should pass up, especially to see what you think of Gameloft’s new payment method.

What’s going to be fun to watch is where Gameloft goes from here, as although I had a bunch of fun with Sacred Odyssey, it’s hard to dispute the fact that the graphics do look a bit dated compared to more recent releases– Especially those utilizing the Unreal Engine. Also, it will be curious to see whether or not Gameloft sticks with this payment method for several reasons: They’re now competing on the free charts, which is substantially more competitive than the paid charts. Sites like AppShopper don’t (and can’t) track sales of items purchased via IAP, as Apple doesn’t offer this data as part of their third party App Store API. This means that all the people who save Gameloft games to a wishlist and wait for sales aren’t going to get any notification. Last, but certainly not least, the IAP transaction requires an active internet connection on your device, which may be an issue for iPod touch users.

Regardless, I had a ton of fun with Sacred Odyssey: Rise of Ayden, and highly recommend any Zelda fan give it a try. You’ll have a great idea of whether or not you want to continue by the time you hit the pay wall, and hopefully you’re somewhere with connectivity so you can proceed past it.