Hey, Tilt To Live’s [$2.99 / Lite / HD] “Viva La Turret” expansion is available on the iPad now. For older users with the full version of the game, the expansion is being offered as an optional .99 cent in-app purchase. To keep things simple for fresh and upcoming users, according to developer One Man Left, the game mode is also being packed into the actual full version of the title, raising the price of the app by a dollar from $3.99 to $4.99.

Great, but what is Viva La Turret? It’s an expansion that adds a new mode and a turret gun called “The Perforator.” In a nutshell, it’s a points-grabbing mode with a lot of crazy points multipliers. Aided by the bullet-spewing Perforator, you’ll unleash hell on swarms of projectiles attempting to bust into your avatar’s mushy insides. In turn, these bad dudes drop blue orbs that give you points.

You can check out a video of the action here in our older post about the expansion, which hit on the iPhone in late 2010. 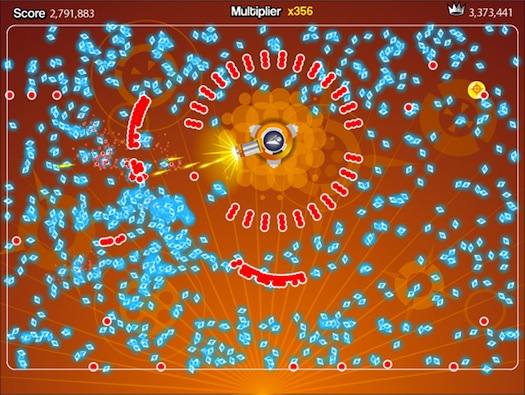 As you’d imagine, the increased screen area of the iPad will make things a bit different in this version of the expansion. As pointed out on One Man Left’s iPad-specific blog post, the game’s barriers are now further apart, meaning it’ll be harder to get those smash kills. Also, the jewels will now spawn further apart making collection just a little bit more of a challenge.

One cool thing that sets the iPad version apart from its predecessor on the smaller screen is the “cruel new wave” added to the action. Because you’re a bit safer due to the screen size, One Man Left has added a wave that only spawns when you’re out of the Perforator that should lead to some breakneck dashes to the safety of the giganto turret.

That sounds great, right? And look forward to a little special something for your purchase if you grab this expansion. One Man Left has revealed plans to push out a co-op update for owners of Viva La Turrett called “Viva La Co-Op” that’ll have you and a partner taking turns either using the Perforator or collecting the blue drops. One Man believes it’ll have the iPhone version of this out by next month, so keep a watch on that.