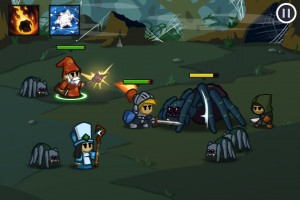 The latest game from Mika Mobile, creators of Zombieville USA [$1.99 / Lite / HD] and OMG Pirates! [$1.99 / Lite], hit the App Store today. Battleheart [$2.99] is a fantastic game of fantasy combat which is not only universal with complete iPad support, but also comes packed with some great Retina Display friendly graphics. I’m not entirely sure I’d call Battleheart an RPG, but it definitely has tons of RPG elements, making it very easy to enjoy for anyone who likes gearing up characters and filling experience bars.

Gameplay consists of a series of battles with your four character party. There are a ton of different character classes, and which classes you pack in to your crew greatly changes how the battles play out. For instance, your party can be melee based, entirely ranged, well rounded, or a mixture of basically anything. Most combinations I’ve tried seem to work well, with the only real requirement being some kind of healing ability on levels with boss-type encounters. (Although with careful micromanagement and highly leveled characters I’m not sure if this is true or not.) 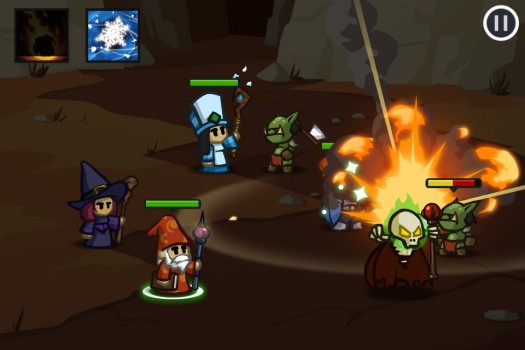 Check out the trailer to see how this all goes together:

Under normal circumstances, I’d be praising this game like non-other and recommending that anyone with a functional finger load it on whatever device it is that they play iOS games on. Unfortunately, Battleheart seems to have quite a few nasty crash issues resulting in quite a few people on our forums as well as myself unable to make it past a particular battle in the game. These crashes seem extremely random, with some people able to play the game just fine, and others crashing like crazy.

The good news is, we’ve been in contact with Mika Mobile and they share our frustration as they haven’t encountered a single crash in their hundreds of hours of pre-release testing. Regardless, fixing these issues and submitting an update is their top priority. We’ll wait for the update to land before we post our full review. In the meantime, if you feel like rolling the dice on whether or not the game will be crashy on your device, you’ll be in for a real treat with Battleheart, assuming said dice roll in your favor.