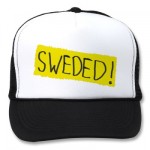 After sharing the “real life Fruit Ninjas” with the world, Kotaku has once again posted an awesome video related to iOS gaming. Some fans of Big Bucket Software’s The Incident [$1.99] that have taken it upon themselves to make a sweded version of the game. If you’re unfamiliar with the term, “sweding” is the art of remaking mainstream films using homemade props and budget techniques.

The practice started with the movie Be Kind Rewind, but has since gone on to become a popular hobby among amateur filmmakers or people who are just plain bored. Typically movies are the basis of sweding, but it can really be applied to anything – even video games.

Going into this, I wasn’t totally sure how anybody could recreate a game like The Incident in real life, given the dozens upon dozens of different kinds of items falling from the sky. But I have to admit, these folks did a bang up job on this. The music just kills me:

Besides this video being pretty hilarious, it also shows – along with the real Fruit Ninja videos – that iOS games have really arrived as a part of the mainstream culture. It always makes me smile whenever I see something related to an iPhone game outside of my normal TouchArcade bubble, and hopefully fans continue being creative and producing amazing things like the above video.