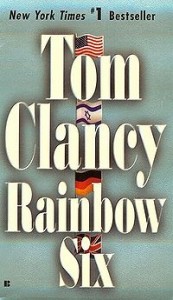 Today Gameloft revealed another upcoming game via their YouTube channel. Not much is known yet about Tom Clancy’s Rainbow Six: Shadow Vanguard other than it’s a tactical FPS, but that much was safe to assume given the rest of the Rainbow Six series. The original Rainbow Six game was released all the way back in 1998 and has since spawned tons of sequels all generally revolving around rescuing hostages, thwarting terrorists, and doing other special operations kind of things. Shadow Vanguard will likely feature similar gameplay, and controls similar to that of other Gameloft FPS games.

Check out the teaser trailer starring faux newscaster Ross Halpert, which is both surprisingly corny and curiously devoid of any actual gameplay footage:

No further details have been announced. Although, historically looking at how Gameloft operates, Tom Clancy’s Rainbow Six: Shadow Vanguard will likely be available in the next few weeks for somewhere in between $4.99 and $6.99. I’ve enjoyed Rainbow Six games on consoles in the past, and am anxious to see how the series translates to iOS devices.