Trendy Entertainment’s ambitious hack-and-slash RPG Dungeon Defenders: First Wave [$.99] has gone 2.0 via a new update. The game now includes a new “Chase Camera,” GameSpy support for cross-platform play, and a new tutorial that tells you all you need to know about the game in “only a minute," instead of the old 10 or so.

Of course, there’s more, especially in the content realm. Trendy tells us that its added a 15 more levels to the cap, bringing it to a startling 70. It has also added new items, and a new challenge and campaign level for leveled-up heroes. 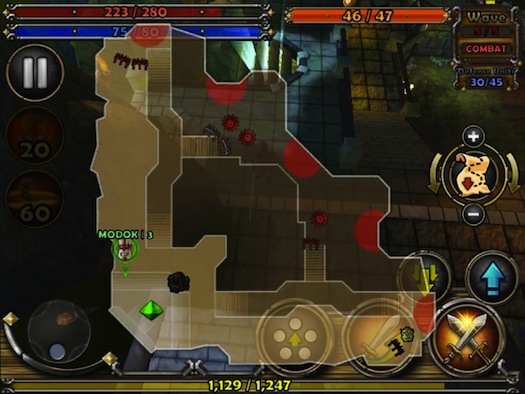 As for fixes, yeah, there are a lot of those in this update, too. Foremost, Trendy believes it has successfully squashed Game Center crash bugs and stabilized voice chat. Also, it’s tweaked item drops and values, thus making it harder to obtain hardcore drops and adding restrictions based on quality. And as if that wasn’t enough, look forward to some performance boosts and “minor bug fixes” game wide.

Now, you probably already know I wasn’t a huge fan of Dungeon Defenders. Even with these updates, I still feel like it’s a console game available for the iOS, but Trendy did tell us that UI improvements might be coming down the pipe, which, if good enough, could certainly make the game play like a real mobile title. Our collective fingers are crossed on this one because, despite its UI and control issues, Dungeon Defenders manages to be a deep and rewarding joint filled with a lot of cool functionality. With a good, streamlined UI it could be plain baller.

Just a small note here: Dungeon Defenders is .99 cents until tomorrow, Jan. 19. After this date, the game will be sold for the usual $4.99.