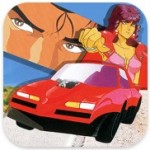 Children of the 80s arcade era get ready, the classic laserdisc arcade game Road Blaster [99¢] has hit the App Store. Developer Revolutionary Concepts, who have experience bringing classic arcade titles to iOS with the likes of Cobra Command [$1.99] and Karate Champ [$1.99/Lite/HD], have given this iteration of Road Blaster a shiny new makeover from its 1985 arcade counterpart. It features remastered FMV sequences that are optimized for Retina Displays, a choice of two different redrawn in-game dashboard consoles, a new soundtrack and plenty of new sound effects, and optimizations over the original.

Road Blaster follows a campy story of revenge (not totally unlike many action movies from the 80s) where you are out to get justice against an evil biker gang who murdered your wife. You’ll hop into your modified sports car and go after these heartless thugs across 9 different levels, with the option of 3 difficulty settings. Operate your vehicle using a virtual steering wheel or the brand new tilt controls. Here’s a video showing Road Blaster being played on an iPhone:

An iPad version of Road Blaster is also in the works, although a firm release date hasn’t been set yet. Owners of older devices should know that the developers have optimized the game to run well across all models of iPhone and iPod touch. Also, Game Center is integrated for leaderboard and achievement tracking. As a special promotion, Road Blaster is launching at just 99¢ for the first week. Impressions are rolling into our forums, and we’ll take a closer look at this title after we’ve had a chance to pump some quarters into it.