There were tons of App Store casualties of the holiday season as EA’s insane sale and the onslaught of news games drowned out the competition in the weeks leading up to Christmas. It’s Just a Thought [$1.99] is one of the many games that got trampled in the holiday stampede which I just discovered today as fellow judges went through the entrants in the International Mobile Gaming Awards. At its core, It’s Just a Thought is a basic tilt to move game that is so basic it doesn’t even come with a way to calibrate the tilt controls. Normally this can be a deal breaker for me since I generally dislike hunching over my phone holding it perfectly level, but It’s Just a Thought is cool enough that I’m more than willing to overlook all that. 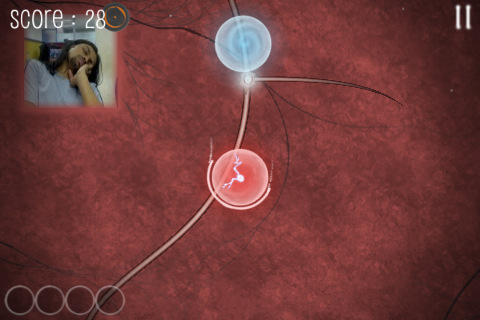 It’s Just a Thought starts with asking for your Facebook name and password. From there, it snags a whole ton of photos which it then uses for the main gimmick of the game which revolves around exploring deep in to your mind and stumbling across these “memories" (your photos) which you must collect. You need to tilt your phone to stay on the neural pathway, lighting up neurons as you go, and tapping on your memories to use as power-ups. It all flows together really well, and the music its set to is a real treat.

For an idea of what I’m talking about, check out the trailer:

It’s Just a Thought is an extremely basic game built around a really clever gimmick of utilizing random photos from your Facebook in the game. If you don’t have a ton of photos on Facebook, it will likely be pretty boring. However, if you do have a bunch of photos, the game is a really awesome stroll down memory lane as you’re tapping to collect memories you’ve long since forgotten that were stashed away in some Facebook album.

I’m not sure how strong of a recommendation I can give It’s Just a Thought because at the end of the day it is just a simple tilt-based game, but as far as the game’s core concept is concerned, it’s really cool– Especially if you’ve got an extensive Facebook photo collection.