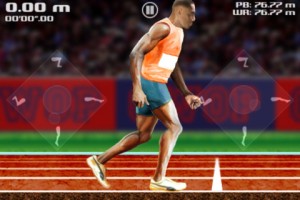 You’ve likely spent quite a bit of your life walking, running, and jumping. Since you initially learned how as a child, these motions have all been second nature and usually don’t even require any thought. But what if you needed to walk, run, or jump without using your legs which you’ve spent your life mastering? Well, that’s where QWOP for iOS [$1.99] comes in.

QWOP, originally named after the keys used to control the runner in the free Flash game, actually seems much more complicated on the iPhone. You need to tilt your device to control your balance, and two virtual joysticks control the positioning of your legs. Your first ten minutes with the game you will likely do nothing but fall flat on your face. However, after a little practice, you’ll get in to the rhythm and be at least making a few baby steps forward.

After you run 10 meters, you unlock the hurdles, the long jump, the steeplechase, and the 50km walk. Actually getting to 10 meters, however, is easier said than done. Check out how silly this all looks in action:

The learning curve in QWOP is astronomical, but what’s so amusing about the game is just how simple it all actually is. All you have to do is put one foot in front of the other. If you manage to master the game, you can compete in all kinds of Open Feint powered leaderboards. If all you do is face plant over and over, well, you’ll be greeted by funny headlines regarding what a failure you are.

I wouldn’t call QWOP a “must-have" by any means, unless you’re the kind of person who collects the oddities of the App Store and has a dedicated folder on your device for Enviro-Bear 2010 [99¢] and other similar crazy games. In which case, you need QWOP.