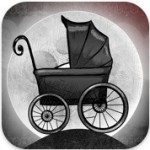 Grimm [99¢] is an interesting little platformer from developer Robox Studios that popped up in the App Store yesterday. You play as a perambulator (a baby carriage, for the non-British amongst us) that has carelessly been left behind at a train station by a couple of snobbish-looking parents. Not only did they leave the carriage behind, though, but they’ve left their infant child in it as well in their haste to board the train for a seaside trip. A shady character named Mr. Grimm notices the abandoned child, and will harass you as you control the carriage through the game in an effort to reunite the baby with its parents.

It’s an odd but intriguing premise, and Grimm is absolutely drenched in a sick and twisted art style that suits the game well. It has a look that’s light-hearted and macabre, and highly similar of the illustrations of Edward Gorey, as so astutely pointed out in our forums. You control the perambulator by tilting the device to move either left or right, with a button for jumping and another for stopping on a dime. Humorously, you can also drag down on the carriage when it’s standing still and a trajectory line pops up. You are then able to actually launch the baby out of the carriage at enemies or to activate puzzle elements. 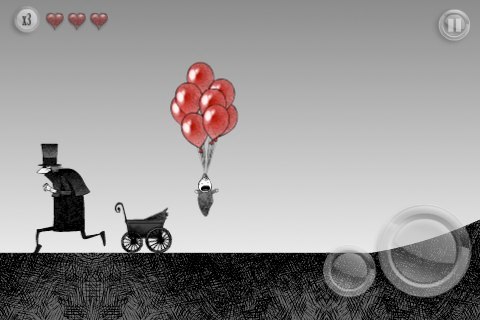 These clever puzzle portions are what work really well in Grimm. You may have to launch the baby onto a switch that lowers down giant barrels into a gap so you can safely cross, or activate the tap on a barrel of ale so that a portly drunkard can drink his fill and become heavy enough to push a platform down, thus creating a way for you to pass. You’ll constantly be coming across blocked paths in your travels, and will constantly be amused with whatever silly means are necessary to enable you to forge onward. These puzzles, coupled with the wonderful art style of Grimm, are the high point of the game.

Unfortunately, there are several low points as well. First, the tilt controls can be a little fussy, and there aren’t any options for adjusting sensitivity or calibrating them. They work, but it’s really hard to be precise, especially when trying to jump on an enemy. Second, and much more annoying to me, is the way the carriage scoops the baby back in after being launched. It’s a cute little animation but it takes way too long to complete, and leaves you vulnerable to attacks while it’s occurring. I’ve died several times just from this, and it can be frustrating. Aside from these two big problems there are also a few more instances of clunkiness in Grimm, but nothing too major or distracting. Also, with such terrifically illustrated graphics, it would be really nice to have high resolution support for Retina Display, which sadly it currently does not.

Even with its flaws, Grimm is a highly entertaining game. It’s worth the price of admission just to hear the baby’s gleeful cry as you launch it across the screen. Levels tend to be rather long, but there is a reasonable checkpoint system in place should you lose all your lives or have to leave the game. The story is told in between levels via poems which are both clever and funny, and even though I feel like I’m a long ways away, I can’t wait to see how it turns out in the end. Some adjustments to the controls and an overall smoothing of the rough edges would go a long way in making Grimm a more complete experience. But even as is, there is a lot to like in Grimm, and if you can deal with tilt-only controls and some minor frustrations, it’s worth taking a look at.