I’m a firm believer that Rovio Mobile has a high-ceilinged vault in the back of its office filled with mounds of cash and coins from the billions and billions of Angry Birds [$.99 / Lite / HD] purchases. I reckon it’ll need to build a new money vault rather soon as a direct result of the game’s latest update, which adds 15 new themed levels and the long-awaited Mighty Eagle, a bit of paid DLC that adds a new, pig-annihilating bird to the Angry Birds roster.

Let’s back up a second. Update 1.5 adds a Wild Western-themed chapter called “Ham ‘Em High." A total of 15 new levels are introduced, none of which feature anything stunningly new from a design perspective aside from cowboy hats and sombreros. It also adds a new Golden Egg “for y’all city slickers" to discover. 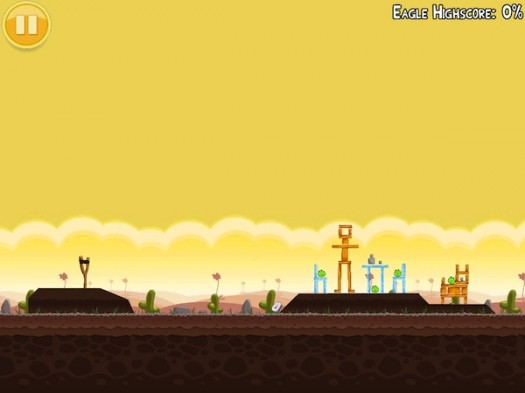 But the update also adds the Mighty Eagle, a one-time, $.99 bird purchase. The Eagle is basically the Angry Birds version of a nuclear bomb. To use it, you slingshot a can of sardines into the environment. When the can stops, the Eagle swoops down and banks off the geometry, causing the physics to react from the aftershock. This clears the level of all pigs and then you can progress.

There’s a cool meta-game with the Eagle, too. After you clear a level, a destruction indicator pops up and reports the percentage of the level you destroyed. The goal here is to to completely wreck a level. Once you’ve got 100 percent, you get a small feather next to the stars on the level select screen, luring completionists in to replaying the whole game again with the Eagle. 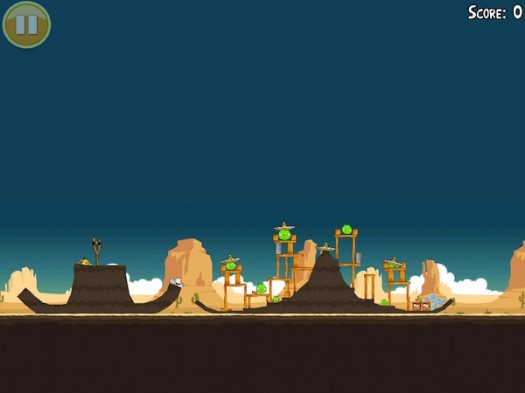 It’s hard for me to tell if the Mighty Eagle disrupts the game’s balance. I think it’s more of a creative level-skip than anything else, considering you don’t get the same sort of satisfaction from pounding the Eagle “Win" button. But these new levels are the only ones I’ve yet to beat, so my frame of reference is bad. The hour between skips seems like a good compromise between letting you skip forward if you’re stuck but preventing you from just skipping through the entire game.

All in all, this is another good update from Rovio, and the new Mighty Eagle destruction gauge makes the new IAP a must-have for every Angry Birds lover.