First, a few sweeping generalizations about this modern era of gaming. Game designers are implementing better, more intuitive user interfaces and controls. Failure is not so much about punishment as it is disappointment. And complex systems and mechanics are much more streamlined, allowing us to just sit back and play, while still enjoying the various complexities of a given game without the mess and fuss.

Games are just… easier now than what they were before. I think no other genre has benefitted more from modern design than the simulation. Your ten-year-old, for example, can probably enjoy Firaxis‘ Civilization V just as much as you do, despite the fact that you undoubtedly have a better grasp of it intricacies. It’s more playable now, which is quite the change from previous iterations.

But when I look at SimCity Deluxe for iOS [$2.99 / HD], I don’t see that new level of polish and refinement, streamlining, and kneading that a lot of modern games showcase. It’s just SimCity, except on a touch-based platform. You start with nothing, as usual, and then build a huge, hopefully thriving city with roads, bustling industrial and residential districts, parks, and other constructs ripped from life. 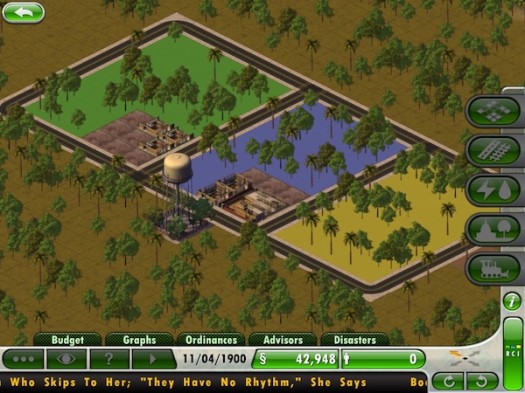 There’s no denying that it has a certain magic to it — creating something out of nothing is still as compelling as ever and SimCity is one of the best, most complex series’ to do this in. But Deluxe isn’t accessible. At all.

I feel like we all know what this franchise is about, so I’ll keep this specifics discussion brief: in Deluxe, you need to build roads, water pipes, power lines, dumps, and then manage all of these various bits of infrastructure before you can even start running your city’s simulation. And then when you do get to the point of simulating, you’ll have to start negotiating these bits and pieces, weighing them against each other while carefully watching a resource meter drain or rise as your city — and it’s interesting parts like industry — grow. Later, you’ll be able to add money-sucking civic buildings, monuments, and parks, provided you’ve the infrastructure in place. 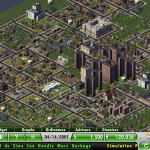 And you’re always just a few missteps from failure, provided you don’t hit the self-destruct button on your own civilization first via alien attack (a real mechanic).

What I’m getting at here is a long-winded way to say that Deluxe is a very traditional SimCity game. It has a few modern bells and whistles, sure. The UI is rather clean and the distinctions between components are crystal clear. Also, it doesn’t burden you with ticky-tacky stuff like building houses or non-important buildings. But in most other regards, this is an old-school simulation that requires a lot of time, patience, and Chess-level think-ahead logic for city planning, zoning, and taxing.

The iPhone version of Deluxe launched earlier this summer and received a decent bit of acclaim, though it had a fatal flaw: the screen was too tiny for the abundance of UI elements and the thousands of tiny little grids in which you can build were hard to access as a result. Deluxe, however, is available on the iPad starting today. 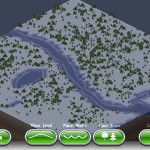 Just as you’d expect, it’s better for it — it’s easier to click within the game and the UI has a lot of breathing room. I still find myself struggling to connect roads and keep things in an orderly fashion, though, I’m thinking this is more a result of the isometric camera than anything else. Working at a slight angle isn’t easy for a city planner in the early stages of the game.

Aside from that, we’re looking at a picture perfect port with a platform-specific flaw: it tends to chug. The iPhone version of Deluxe is pretty snappy, but the iPad version, for whatever reason, suffers frame drops or otherwise general slowness.

I think I can sum up my impressions of Deluxe with this: the game never entices me to stay in it too long, and I wish I could play it with a mouse and keyboard. The precision isn’t there despite the spacing and there aren’t enough carrots leading me through. 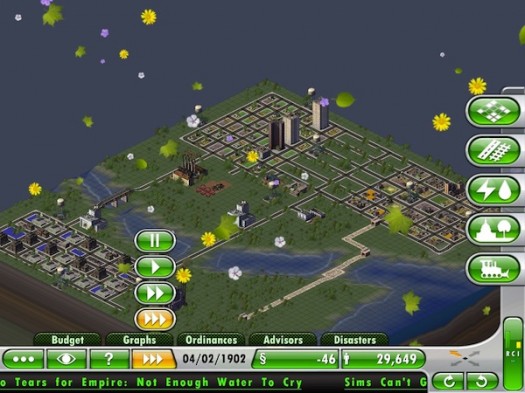 If you’re a card-carrying member of the SimCity Elite Club who has spent many a sleepless night in torturous anticipation of a SimCity for the iPad, you’re in a position to enjoy Deluxe. You’ll be able to put up with the archaic design, in other words. For those of you out there who aren’t familiar with the series and Deluxe would be your first plunge, this isn’t the title to start with. For Deluxe, you need a good sense of how SimCity works and what the game demands, or else you’ll risk getting lost and frustrated.

Just a couple of mode notes: Deluxe boasts a tutorial that does an OK job of walking you through the basics, but fails to really dive into what it takes to create an uber-successful, bustling city. Starter cities are available, too, for those who can’t quite break through the rags-to-riches play or handle Deluxe‘s much-too-steep learning curve. Additionally, several scenarios are available for the advanced player who wants to hit an end game goal or needs a challenge.