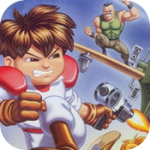 Back in September, I visited Sega‘s San Francisco offices and had the chance to get some hands-on time with their upcoming Genesis emulator port of Gunstar Heroes [$2.99] for iPhone. Gunstar Heroes is a classic run ‘n gun shooter from hallowed developer Treasure that first appeared on the Sega Genesis back in 1993 but can since be found on most major console download services and in various compilations. Last night the iPhone version of Gunstar Heroes made its way to the App Store.

Gunstar Heroes has developed a hardcore following over the years by being one of the most action-packed titles of its kind. Seven stages filled to the brim with enemies and frequent boss battles await the Red and Blue Gunstar twins. Developer Treasure had a knack for creating intense games with fast-paced action, dozens of enemies coming at you at once, humongous enemies, and fantastic pixel art and music. Gunstar Heroes was brutally difficult with physical buttons back in the day, and this difficulty is only compounded with the virtual onscreen controls of Sega’s Genesis iPhone emulator. 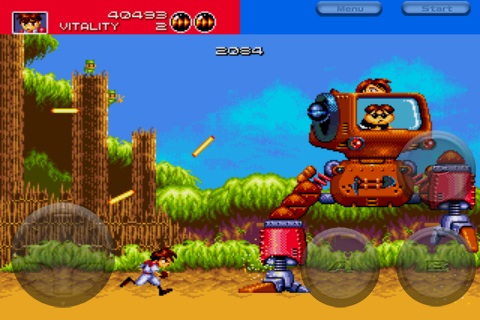 For nostalgia enthusiasts, the iPhone version of Gunstar Heroes may be worth the few dollars to download and experience on the go at any time. The virtual controls are unwieldy, but the game is still fairly playable and retains all of the epic content of the original. Gunstar Heroes was always at its best when playing with a friend during 2-player simultaneous co-op, and this feature has been retained in the iPhone version thanks to a local Bluetooth multiplayer option. If you think you can manage to play one of the harder games ever created with the added difficulty of virtual buttons, then Gunstar Heroes is worth a look, just don’t blame me if you end up throwing your device into a wall due to frustration.