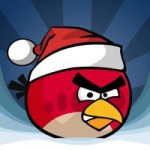 It looks like another seasonal addition of Angry Birds [$.99, Light, HD] is coming our way. Developer Rovio has switched its Facebook profile image to what could be an “Angry Birds Christmas" logo, perhaps teasing a new, presumably level-packed version of the global success.

All we’ve got is speculation. As of right now, Rovio hasn’t made an official comment revealing “Angry Birds Christmas" edition, but it’s hard to shake the feeling that one will be coming. Angry Birds Halloween [$.99, HD], an iOS-exclusive joint released on October 21 for $.99, charted and amused fans of the game with its 45 levels and themed content, which included new visuals and pumpkins.

Of course, this avatar update could just be Rovio’s way of celebrating the Christmas season — we’ve fired off an e-mail to Rovio to see if this is the case and we’ll let you know for sure when or if we hear back.

UPDATE: A Christmas edition of Angry Birds is something Rovio has hinted at before, as Pocket Gamer points out. Awhile back Rovio had this to say on its Twitter feed: “we will do something cool for Christmas. A bit different too…” It is now gently teasing folks asking about “Angry Birds Christmas" via Twitter.