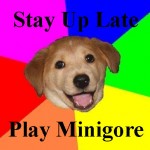 Minigore [Free / HD] is less of a game and more of a legend, at least on the TouchArcade forums. The developers somehow managed to drum up a level of pre-release hype that was unlike anything I’ve ever seen before, spawning dozens of threads, some going on for hundreds of pages, and the infamous Minigore dog image. Following that, quite literally every dual stick shooter that was released for quite some time was immediately compared to Minigore, with people from both sides of the Minigore love/hate fence duking it out in the comments of every story that was even vaguely relevant. I still don’t understand it, and I’m not sure I ever will.

Since the initial release, Minigore has been updated several times. These updates enhanced the graphics, added Game Center, threw in some new playable characters, and implemented so many character tie-ins with other iPhone games it bordered on ridiculous. If you were around for the Minigore release phenomenon but never made the plunge and actually downloaded the game, here’s your chance to see what all the fuss was about. If this is the first you’ve heard of Minigore you should download it anyway because it’s still what I consider one of the better dual stick survival shooters out there.