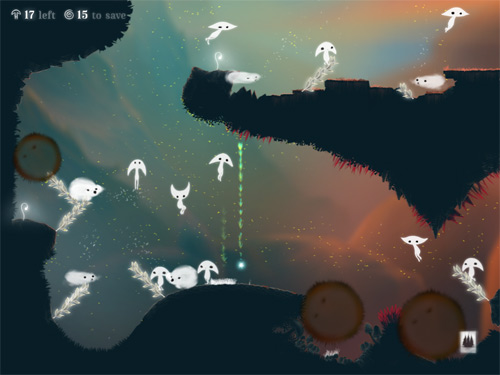 Indie development house Spaces of Play has just released their platform puzzle game Spirits for iPad [App Store. Spirits, which won the Best Aesthetics award at this year’s IndieCade, is a lovely title featuring Lemmings-like gameplay, but with some notably different elements that help the game deliver a unique experience all its own.

In Spirits, you are faced with a series of hand-drawn platform levels, most of them larger than the iPad’s screen (pinch, zoom, swipe to scroll). There are 40 in all. Into each of these environments march a crowd of cute, little spirits who want nothing more than to make it into the swirl found at the far end of each level. But that journey is quite a rocky road. 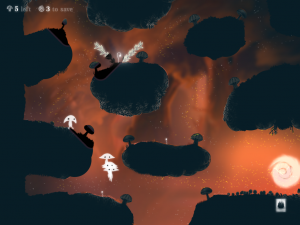 The landscapes in question are filled with drops, blocks, spikes, and other such dangers. To negotiate the landscapes, you must tap on a spirit to command it to perform an action — just like in Lemmings. You can dig and climb — just like in Lemmings. But, you can also blow and block wind — not at all like in Lemmings. You see, the swirl that your spirits must reach hangs in mid air. To bridge this gap, and to add complexity to the maps in general, there is a strong wind blowing along a particular course through each landscape, indicated by a lazily flowing swarm of particle effects. Part of getting through each level is tapping into this passing breeze — or creating your own, where needed. It’s a mechanic that adds a whole new dimension to the Lemmings formula and is a big part of what makes Spirits special.

Each level has a set number of spirits that must be saved in order to call the round a success. Several sleeping flowers are arranged about each level, and must be brought to life by direct contact or a tap on a spirit flying by, overhead. The game has a kind of “zen" feel about it that the developer calls “poetic," which is enhanced by the orchestral audio tracks that accompany the gameplay. It’s, at the same time, engrossing, relaxing, and a bit hectic.

Your success in the game is tracked on a global ranking board that keeps you aware of where you stand, as compared to the other Spirits jockeys around the world.

While there are already a few Lemmings clones in the App Store, Spirits for iPad stands apart. The overall design — graphics, animation, audio tracks — as well as the whimsical element of soaring on the wind, really make this an enjoyable title to experience. The game feels an excellent fit for the iPad, and an iPhone version will follow, shortly.

There are a number of titles out there that really ooze that special “indie magic," and Spirits for iPad is one of them.