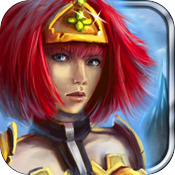 Engine licensor and creator Unity has surely put a hop in Dicework Games and Crescent Moon’s step of late. Yesterday, Unity’s own award show wrapped up and the two studios’ turn-based RPG, Rimelands: Hammer of Thor [$.99], took home the award for Best Mobile Game, according to Develop. This is a huge deal; the engine is widely used by solid App Store developers for their own financially successful and technically solid games.

And if you want, you can check out this award-winner for a lower-than-normal price. For a limited time, you can grab Rimelands for a measly $.99 instead of the usual $4.99. That’s not a bad slash considering the well-earned acclaim that we can substantiate with our own review.

In other related news, developer Crescent Moon is working on a universal update for Rimelands that is set to hit before this Christmas. We spoke with Crescent’s Josh Presseisen this morning about the update. Here’s a list of what he said to expect, and do note that it favors those who have finished the game:

The cost of this update is, of course, free.