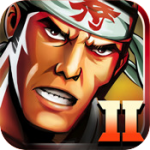 Back when the original Samurai: Way of the Warrior [$1.99] was released on the App Store, we thought it was an incredible display of what the current iPhone was capable of. Awesome cell shaded graphics were combined with some of the most gory gameplay available at the time which unfortunately was sullied by a cumbersome swipe-based control scheme. However, this didn’t stop Way of the Warrior from topping over 800,000 downloads and winning a number of awards including being listed among Apple’s Best Games of 2009.

Samurai II: Vengeance [$2.99] was released last night as a universal app, and after putting it through its paces I can safely say that this is a worthy sequel in every regard. First off, if the cell shaded graphics of the original Samurai wowed you, to put it lightly, you ain’t seen nothin’ yet. The game looks great in screenshots, but seeing it running at 60fps on the Retina Display of the iPhone 4 or on the iPad is downright incredible. Utilizing the latest version of the Unity 3D engine, MadFinger Games has made the entire game world even more detailed, making me stop quite often while playing the game to just look at my surroundings to take note of just how great something like a patch of bamboo looked– Something I really can’t say for too many video games, console titles included. 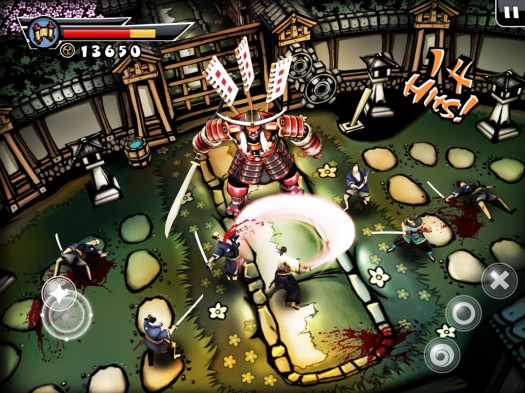 Especially on the Retina Display, Samurai II: Vengeance looks like a comic book in motion and the game’s camera always makes sure you’re focused on the action. For instance, when you’re fighting an array of enemies, it will pan in and out whenever you’re executing any of the varied combo finishing moves. When you get a hang for the combo system, this results in an incredible display of swords flying, blood splattering everywhere, with the camera zooming in to show the blood spurt emanating from a decapitated foe, then (if you can keep it up) repeating the whole thing on the next enemy– Only this time, you might slice them in half. 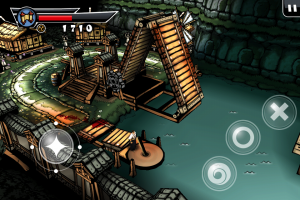 All of these combos are reasonably easy to pull off too, since the convoluted swipe system of the original has been replaced with a much more sensible virtual joystick and array of buttons. One could argue that the swipe system made it feel more like an iPhone game, and to some extent I agree, but actually being able to pull off the moves you want instead of what the original Samurai thought you wanted to do makes playing the game a lot more fun. Also, with your hands fixed in one position, you can actually enjoy the graphics and overall mood of the game instead of constantly obstructing the screen with wild swiping and tapping motions.

Unfortunately, with all this awesome comes a bit of, well, not so awesome. Samurai II: Vengeance is an extremely linear arcade style brawler to its core, which is great if all you’re looking to do is slaughter wave after wave of baddies, but not so great if you like games with a little more variety than just repeating your most effective combos over and over. Some light puzzle elements are included, and there are a few gauntlets of fairly menacing traps you’ll need to navigate, but other than that, it’s just straight up bloodbath action which could be a good thing or a bad thing depending on how you look at it. Personally, I found myself getting bored at times during the game especially early on before you see a little more variety in enemies and have some upgraded combos. 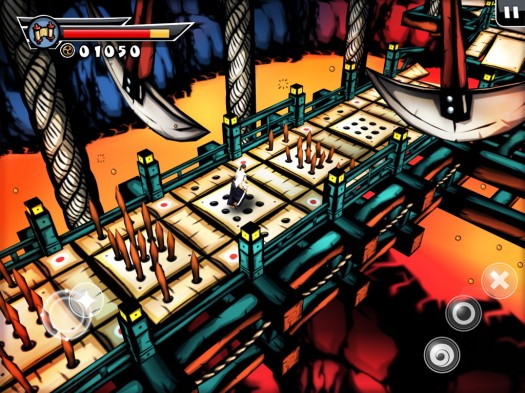 Speaking of upgrading, Samurai II has a barebones experience point system of sorts that allows you to buy new combos, upgrade existing ones, and add some extra pixels to your health bar. The rate that you unlock new things seems pretty good, but again I found myself wishing there was more you could do to customize your character. In comparison, Gameloft’s Hero of Sparta 2 [$6.99 / Lite / HD] offers a silly amount of character customization through various unlockables. 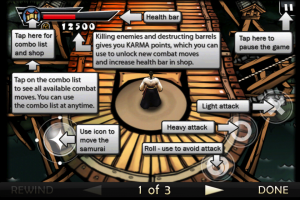 The difficulty level of Samurai II: Vengeance, even when playing on normal, can be a little too challenging. There’s no way to heal aside from when you’re refreshed when battles are over, which can often result in an incredibly frustrating series of do-overs especially later in the game with some of the gauntlets of enemy warriors Samurai II throws at you. Also, instead of any kind of tutorial to speak of, the game begins with a completely overwhelming four screen slideshow detailing every function of every UI element. While this might not be an issue for the hardcore gamer types that populate the TouchArcade forum, I’m not sure how well it will go over with the general populace.

If you are the hardcore type, you’ll be happy to know that the endless survival mode dojo has made its return, complete with Game Center-powered leaderboards. Also, each of the seven chapters has its own leaderboard, and if achievements are your thing, there are a bunch of those as well.

While Samurai II: Vengeance isn’t going to knock Epic Citadel [Free] off its throne of having the most jaw-dropping graphics available on the platform, this is an actual game, and is a must-have if you’re looking for another way to show off the Retina Display. I’d love to see more variety in the gameplay, upgrades, and a more forgiving difficulty mode, but otherwise Samurai II: Vengeance is everything a great sequel should be.