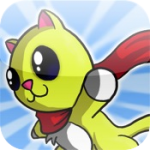 Alright, so here’s the story behind Skycat and The Starchildren [99¢]– Two cats who were the best of friends were just chilling outside one summer day when Fatcat (Yes, that’s his name) went galavanting off and found a massive rocket that was prepared to launch. Like any curious cat, he decided to wander in and investigate. Moments later the rocket went soaring skyward, leaving Ordinary Cat (Yes, that’s the other character’s name) sad and without his buddy. Out of nowhere, Mother Star appears granting Ordinary Cat a magical scarf which then transforms him in to “Skycat, the star born herald of the sky."

This is all told through an incredibly cute series of animated story pages, which serve as a teaser for the surprisingly detailed graphics that encompass the rest of the game. Gameplay consists of very similar platforming to classics like Robot Unicorn Attack [$2.99 / HD] in that you’re constantly running to the right and (utilizing your magical scarf) are capable of jumping and dashing. However, instead of having a button to dash, you just swipe on screen in the direction you want to dash. This allows you to dash upwards to jump extra high, as well as forwards to speed up.

The platforming in Skycat and The Starchildren is fantastic, as controlling which direction you dash really allows you to have some pretty great control over your scarf-powered kitty as shown in the above video. While you’re running through the levels, you collect small stars which serve to lower your overall completion time at the end of each level. Game Center is integrated to track times against everyone online, and once you play through the game a time trial mode is unlocked to allow you to continue to hone your speed runs. 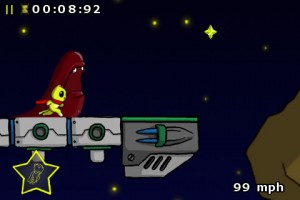 The issue with Skycat is that it is short. Nine levels in all are included, which will barely take you any time at all to complete. Now, I don’t really take issue with short games, as a lot of the time a game can be short but feel like a complete experience. (No, Human is a great example of this.) However, Skycat is over before you even feel like you’re getting started.

Normally I’d say that’s cause to just skip a game, but what kills me about Skycat and The Starchildren is that it’s really good. The controls feel right, the opening and ending to the game are great, the music is good, and both the levels and Skycat himself are animated really well. I would absolutely love to see an endless mode eventually implemented in Skycat, or more levels, or anything. If you can disregard playtime for quality, I’d definitely recommend Skycat and The Starchildren. Otherwise, this is totally a game to keep on your watch list for potential future updates.