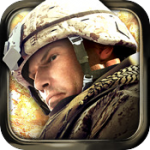 Back when Gameloft’s Modern Combat: Sandstorm [$4.99 / Lite / HD] was first released, in our review we called it one of the most impressive gaming experiences we’ve seen so far on the platform, but it wasn’t long before it was inevitably bested by other first person shooters (some even released by Gameloft themselves) on the fast paced market of the App Store. Gameloft ups the ante once again with Modern Combat 2: Black Pegasus [$6.99], a game that is by far their most blatant carbon copy yet, but is executed so masterfully that it hardly seems to matter.

If you’ve played Infinity Ward’s Modern Warfare 2, you’ll know exactly what to expect out of Modern Combat 2. Single player consists of a similar mixture of combat scenarios that follow the typical plot line of hunting terrorists. Objectives are varied and involve some light stealth elements, protecting caravans, escaping from or infiltrating enemy installations, and others. However, just because this has all been done before in other games (and even to some extent in the original Modern Combat), it doesn’t make playing through the single player campaign any less fun– in fact, it’s a blast to play through. 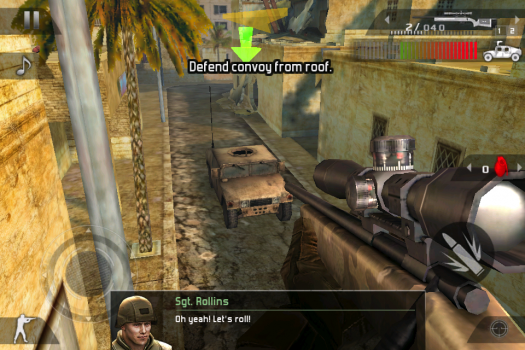 The default normal difficulty is incredibly forgiving, with the same health regeneration that has practically become standard in first person shooters. Modern Combat 2 also has an aim assist system that will snap your crosshairs on to nearby targets, taking a lot of the frustration out of controlling the game. In addition, an arrow on the top of the screen constantly points to where you should be going. Of course, if you don’t need your hand held, you can crank up the difficulty and turn off all the assist systems– resulting in a surprisingly challenging campaign.

One of the best things about Gameloft games is their incredible consistency when it comes to all the little things that you don’t usually notice unless a game lacks them. For instance, you’re able to completely customize your controls and the locations of interface elements on screen. You can control your music without leaving the game or even visiting a submenu, it saves your progress when you close the game for any reason and resumes instantly, and when you pause, it displays the time and your battery level. Modern Combat 2 has all this and more, adding to the near-perfect technical execution of the game. Also, if you’re playing on an iPhone 4 or 4th generation iPod touch, you’ll be able to enjoy optional gyroscope controls and full Retina Display graphics. 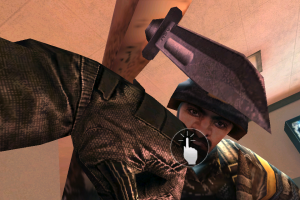 Unfortunately, this also means if you play a lot of Gameloft games, you’ll also notice many similarities that can ruin your immersion. For example, the quick time event sequences used for your spider sense in Spider-Man: Total Mayhem [$6.99] has since turned in to slow motion interactive cut scenes where you need to tap specific areas of the screen to do things like avoid an explosion, an incoming knife, or grab a ledge. Quite of a few of the events that take place in the incredibly scripted single player campaign feel recycled, and it seems like far too often you’re using the familiar mounted turret gun to defend against an oncoming swarm of bad guys. However, once again, all these mechanics go together so well in Modern Combat 2 that they’re not much of a distraction even if you stop and notice them.

Much like Modern Warfare 2, the single player campaign in Modern Combat 2 almost seems secondary to the extensive online multiplayer included. Gameloft is boasting MC2 as providing “the most comprehensive FPS multiplayer experience on the App Store," and that’s a claim that is hard to argue with. It’s almost like Gameloft internally distributed copies of Modern Warfare 2 and simply said, “Make this, but for the iPhone." Initially, you might groan at just how obvious the similarities are, but all that will quickly wash away when you realize just how awesome it all is and how an experience bar with tons of unlockables serves as an unbelievable carrot on a stick, keeping you playing for hours on end without even realizing it. 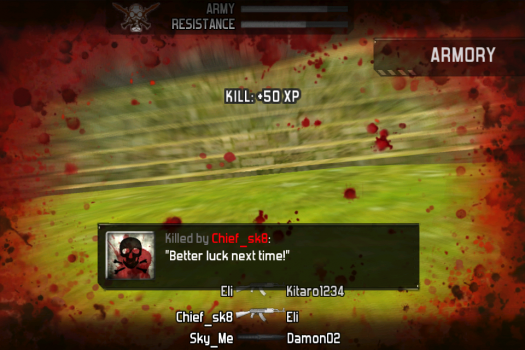 Seemingly every positive action you make in an online game awards experience. Headshots, kills, assists, revenge kills, and other things result in an explosion of experience points in the center of your screen. Eventually you level up, unlocking new ranks, weapons, and kill messages which work just like the Modern Warfare 2 title and emblem system and displays little tag lines on the screen of the person you killed. (However, unlike Modern Warfare 2, endless drug references are nowhere to be found.)

Multiple game modes are included, and all are a lot of fun. Both standard and team-based deathmatch makes an appearance, as well as a capture the flag and diffuse the bomb game mode. Whatever you play, it will be with up to ten players at once either locally or online. Online multiplayer works incredibly well, and aside from a few rogue disconnects I haven’t had any issues playing game after game.

It remains to be seen how much post-launch support Gameloft will provide Black Pegasus. I’d really love to see Game Center supported for matchmaking, as finding friends online with Gameloft Live is a chore and I’ve really been looking forward to not needing to worry about what everyone’s Plus+/OpenFeint/Gameloft Live/Crystal/Agon/etc. names are. Also, I’d love to see more multiplayer maps or even additional ranks and weapons to unlock either via some kind of DLC pack or available as a free update.

As I mentioned previously, Modern Combat 2: Black Pegasus is Gameloft’s most blatant clone yet. However, there is absolutely nothing like it on the App Store. Without a doubt, this is a game that absolutely every fan of Modern Warfare 2 should have on their iPhone. The single player, while entirely cliche, is extremely fun to play through and the online multiplayer is incredible. Our forum members have been going crazy over the game, and as it stands, Modern Combat 2 is the king of iPhone first person shooters. For now, anyway.