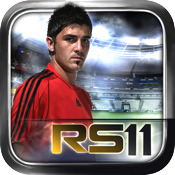 Gameloft’s Real Soccer 10 [$6.99 / Free] successfully launched last year on the back of realtime online multiplayer, being the first iOS soccer sim to offer across the globe head-to-head. Competitors quickly took note, so that this year the focus was supposed to be on improving laggy online multiplayer and pushing the boundaries of the iOS hardware. With PES 11 just launched internationally (coming to the US soon) and the better-funded Fifa 11 [$4.99] launching last week (with Fifa 11 receiving a tentative thumbs up from us) is Gameloft’s claim on the virtual soccer market dwindling? We take it for a run to find out.

Of all the soccer sims released last year, with X2 Soccer 2009 [$4.99] being the only one not already mentioned, Real Soccer 10 sadly took the back-seat in the graphics department. Things seem to have notably improved this year, with the addition of high definition Retina Display support and much more attention spent detailing each player and arena. That’s not to say that you’ll be able to identify any real likenesses, as in Fifa 11, as models remain largely generic. This is worsened by the fact that Gameloft lack of official licensing– many teams suffer from having randomly populated player names. Stadiums and crowds do look better this year, though again Gameloft doesn’t have the licences required to emulate the former, and the latter suffer from blocky models and ugly texture work when shown up close.

One of the things Gameloft did deliver on last year, was a very fluid style of football, with an almost arcade spin on it. That’s continued through in Real Soccer 2011, with performance being a real winner, particularly when compared with Fifa 11 which we struggled with in its as-yet unfixed, laggy state. Unfortunately, with all the improvements the other franchises have made to address realism and to take an accurate account of player skill, we’re not confident that Real Soccer 2011’s instant passes and exaggerated accuracy in front of goals will be appreciated. The AI certainly doesn’t do this any favors either, often gifting the game to you (even on highest difficulty levels) through silly mistakes such as pausing when intercepting the ball, or failing to track their runners entirely. 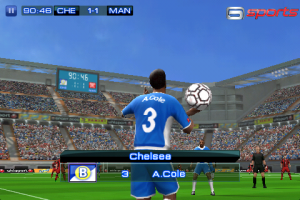 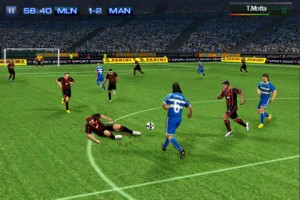 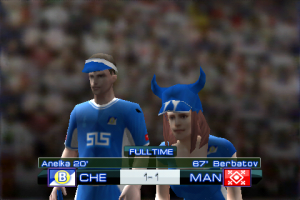 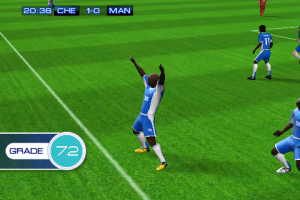 Where Real Soccer 2011 does lead the pack, is in its approach to the control system, with an integration of on-screen gestures and sensible button combinations, and a much-needed sprint button (addressing my persistant woes with the virtual stick). Only an A and B button is present on-screen, and these two buttons handle all the inputs that other games struggle with just fine. Through balls are simply made by holding the B (pass) button, while crosses require the B button to be dragged up slightly. One-Twos are intuitive too, with a simple double tap of the B button getting the job done. Complex dribbling moves like the Marseille Roulette and flip-flop are cake in Real Soccer 2011, with just a quick circle or double tap anywhere on the screen needed

Real Soccer 2011 also boasts a ton of game modes, though very surprisingly, online multiplayer is entirely omitted. Still, you’d be hard pressed to top Gameloft’s efforts here, as they’ve included Seasons, Leagues, Cups (Yes, there’s a Champions-league-alike too, in the Euro Cup), Historic Games, Training, Penalty Shoot-Outs, and even an RS League, where your winnings contribute to an overall online ranked leaderboard. Additionally, there’s an ‘Enter the Legend’ mode, Gameloft’s take on EA’s “Be a Pro" mode in past games, where you are given control of a single player in a selected team and the AI plays around you. Our time with this mode led to more frustration than anything else though, as you’re left at the mercy of the sub-standard AI (even randomly subbing us off) and the on-screen controls do nothing to help your situation. We ended up giving Enter the Legend a wide berth in the end.

Though there were things I loved in Real Soccer 2011, I can’t help but feel that although Gameloft have taken 3 steps forward from last year, it hasn’t been enough to keep up with the improvements we’ve seen in Fifa 11 and X2 Football 2010 [$6.99 / Free] this year. With an emphasis amongst the big names on bringing console-quality football to the iOS, Real Soccer 2011’s notable lack of licenses, average, repetitive commentating and just plain awful AI only serve to underline Gameloft’s flailing grasp on the market. What Real Soccer 2011 does have going for it however, is a successful implementation of Retina support, as Fifa 11’s iPhone 4 support is dismal at this stage pending a critical fix, and PES 11 seems to have foregone Retina support altogether. As far as the gameplay goes however, particularly with the lack of online multiplayer from last year that made it a hopeful contestant, Real Soccer 2011 will likely appease only the casual soccer fan, once again playing second fiddle to the big guns.