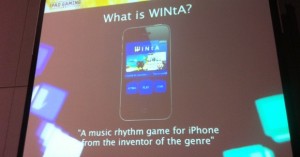 TUAW’s Mike Schramm is all over GDC Online this week, and managed to snag a preview of WINtA, an up and coming rhythm game from Masaya Matsuura. While that name might not be immediately recognizable, his creations surely will. Matsuura designed PaRappa the Rapper, a PlayStation game which was among the first rhythm games and featured gameplay that involved tapping various buttons along to the beat of songs. In fact, PaRappa was so catchy that I can still bust out most of the raps from the game in their entirety. (And I doubt I’m alone in that.)

WINtA is an abstract rhythm game which will be released on the App Store for free later this year. Unlike most (all?) rhythm games on the App Store, WINtA has gameplay that matches up with the lyrics of the song rather than just the beat itself. Each syllable requires its own tap, and playing the game is comparable to Elite Beat Agents in that you tap various areas of the screen at the right time.

The following video from the presentation at GDC shows a bit of gameplay:

The game will be monetized via DLC packs of songs with 100% of the profits going to charity. It all sounds pretty great to me, especially with the man who essentially created the genre developing for the iOS with all the proceeds going to a good cause. I can’t wait to get my hands on it.