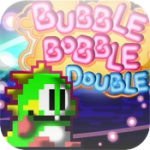 Classic arcade game fans were extremely excited when developer Taito announced at E3 2010 that a Bubble Bobble game would be coming to the App Store. They then revealed at this year’s Tokyo Game Show that the game would be called Bubble Bobble Double, and would feature an authentic port of the original arcade game as well as a new style game based on the Bubble Bobble universe. Just a couple of days ago, Taito tweeted a short gameplay video of this new mode, and later tweeted another video of the classic mode in action. Earlier today, Bubble Bobble Double [$4.99] went live in the App Store. After giving both game modes a thorough spin, I’m definitely left with mixed feelings.

On one hand, it’s incredible to have the original Bubble Bobble arcade game with me at any time on my device. All one hundred of the original levels are here, with the original music and sound effects that are so near and dear to many gamers’ hearts. The problem is that all this nostalgia is represented on a tiny game screen with virtual controls that leave a lot to be desired. I understand Taito’s dilemma though, as thumbs would just block too much of the gameplay if they had the game running on a larger portion of the screen. There is a zoom option but it really only makes the screen marginally bigger, and while the game is still very playable it’s harder to enjoy on the small screen. 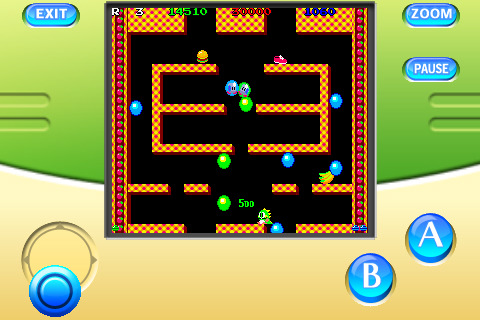 The virtual controls themselves work alright, it’s just that Bubble Bobble is a game that really requires tactile feedback while playing. It can be really frustrating trying to focus on the onscreen action and end up losing a life because my finger slipped off of the virtual d-pad, or that I accidentally hit jump instead of shooting a bubble. Again, it’s not unplayable by any means, just not ideal. One cool aspect of the classic mode is that you can choose to bring the second player into the game at any time. This player is controlled by AI and helps you defeat the enemies on each level. For a game that was really at its best with two players in the arcade, this is a neat addition, although I’d love to see an actual two-player mode via WiFi or Bluetooth. 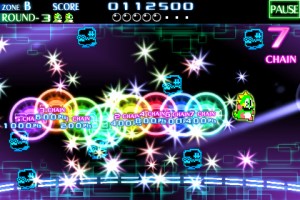 The new mode found in Bubble Bobble Double is where the package kind of falls flat. Here, your character sits in a fixed position as enemies attack in various formations from every angle. Tapping an enemy puts them in a bubble, and tapping them again pops that bubble thus defeating the enemy and giving you a fruit bonus. The blast from the bubble popping can destroy other enemies near it, similar to how chain reactions are caused in games like Splode [$1.99] or Sneezies [99¢/Lite]. Enemies trapped in bubbles can also be flicked around the screen to get them near other enemies to set up combos, or combine with others trapped in bubbles to create an even bigger bubble to pop.

The new mode has plenty of levels, collectable items, and online leaderboards through OpenFeint. The problem is that it’s just not very much fun. Gameplay consists of mostly mindless tapping, and enemies enter the screen too quickly to really utilize any kind of strategy by flicking them around and creating combos. Most levels can be completed easily by just frantically double tapping every enemy, and you’re really only ever in danger if you do try to go for elaborate scoring opportunities. After playing through some of the zones in this new mode, I honestly just wasn’t compelled to keep going.

The classic mode in Bubble Bobble Double can still be a lot of fun despite its shortcomings. The ability to continue as many times as you want or start a new game from any previously beaten level are nice touches, and the pseudo two-player aspect actually adds to the experience. As for the new mode, it’s just plain underwhelming compared to the timeless gameplay and design found in the original game. Depending on how big a fan of Bubble Bobble you are, you may find Bubble Bobble Double a solid purchase. I’ve easily spent much more than the price of this game both in arcades and on home console versions over the years, and I’ll make do with the less than ideal screen size and controls just to enjoy the game over again. But if you were looking for an innovative twist on a classic game like what was found in Taito’s Space Invaders Infinity Gene [$4.99/Lite], then you’ll most likely be left disappointed.