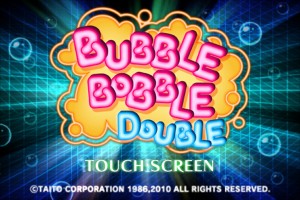 Earlier this morning, developer Taito briefly announced on their Twitter the existence of a game called Bubble Bobble Double for iPhone and iPod touch devices. The initial tweet had nothing more than the shot of the title screen that you can see to the right, but just about an hour ago they uploaded a video of early in-game footage of Bubble Bobble Double. Taito had originally announced the existence of a Bubble Bobble game for iOS devices back at E3 in June, and this is what our own Eli Hodapp had to say about the possibility of such an immense classic coming to the iPhone:

The next retro classic Taito is bringing to the App Store is Bubble Bobble, and I doubt I’m alone in hoping this game gets the same amazing treatment as Space Invaders did in Space Invaders Infinity Gene [$4.99]. Today all they were able to show is a basic demo of the game running with touch controls, but they assured me that Bubble Bobble for the iPhone would feature both a “retro" mode, and a new game mode they weren’t willing to talk any specifics beyond telling me to not “expect something just like the original."

The video that Taito released tonight shows the new gameplay mode hinted at at E3:

I have to admit, I have no idea what is going on in this video. But I’m definitely intrigued. Taito notes in one of their tweets that Bubble Bobble Double will include a faithful recreation of the original arcade game as well as this brand new mode. A decent version of the original running on my iPhone is enough reason for me to get excited about this release, and Taito has proven that they can deliver a fresh take on an old gameplay concept with Space Invaders Infinity Gene giving me reason to be excited about this new mode as well. No word on a release date or pricing yet, but you can join in on the discussion of the game in our forums and we’ll bring you any new information on Bubble Bobble Double as it becomes available.