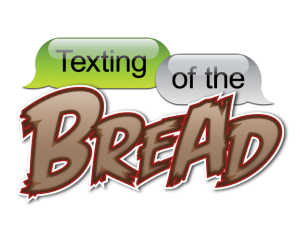 I suppose I should start this out with a little history lesson since the roots of this game are likely obscure enough that they won’t be apparent to some readers. The House of the Dead is a video game series that began its life as a light gun rail shooter arcade machine in 1996. The games all share common themes in that you play as an agent (or pair of agents in two player mode) fighting various flavors of zombies, mutants, and mutant zombies. Many of the games have since been ported to other platforms such as the PC and quite a few home consoles. Typing of the Dead made its debut in 1999 in arcades of Japan, and just like the House of the Dead games, eventually made its way to the PC and home consoles as well.

Today our friends over at ScrewAttack.com released their first iPhone game, Texting of the Bread [$1.99], a fantastic homage to Typing of the Dead. The gameplay remains mostly the same, with two main differences that are hinted at in the title. First of all, quite a few of the things you’ll be typing are commonly used acronyms in text messages, internet slang, and video game lingo. Secondly, zombies have been replaced by gingerbread zombies of all shapes and sizes. Sticking with the cookie theme, when you’re in a pinch you can shake your device to unleash a tsunami of milk to wash everything on screen away as well.

Texting of the Bread comes with three game modes: Arcade had you fighting your way through waves of zombies, with some sparse story elements sprinkled throughout. Freeplay allows you to then go back and replay any of those waves you’ve unlocked in arcade mode. Finally, survival mode is exactly what it sounds like– Typing as fast as you can to see how long you can survive. To spice things up further, there are a bunch of achievements to farm and online leaderboards for both arcade and survival modes. 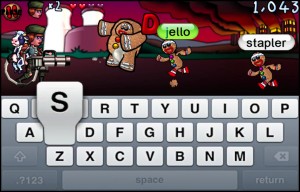 I’m really surprised how much fun I’m having with the game, although, I’m sure a bit of that has to do with my love for just how ridiculous Typing of the Dead was. Texting of the Bread shares an identical gameplay mechanic, and I appreciate ScrewAttack upping the ridiculousness ante by arming you with some kind of typing-powered milk bullet chain gun up against an onslaught of gingerbread zombies.

The only real down-side to the game is that currently it’s only playable with the horizontal iPhone keyboard. I’ve always been a portrait mode typer myself, but according to the developers they’ve found that the vast majority of people out there are horizontal typers. Either way, portrait mode is on the list of things that we could potentially see in future updates.

If you’re part of the cult following of Typing of the Dead, you need this game. Otherwise, Texting of the Bread is a fun and silly way to either brush up on your iPhone typing skills, or in my case, come to the depressing realization of just how fast you can type on your phone. (And the subsequent realization of just how much time you have had to spend typing on your phone to get that good.)