If you were around for the arcade craze of the 80’s, you no doubt have seen a coin pusher at some point. Basically, a traditional coin pusher is a machine loaded with quarters or whatever tokens the arcade used with a mechanical “broom" that pushes back and forth at the back of the machine. The goal of the game is to drop a quarter in to the machine, and when it gets pushed forward it pushes all the other coins in front of it forward, hopefully resulting in said coins falling to the collection tray below.

Here is a video I found on YouTube of a real coin push machine in action:

While I’m sure there are more games with similar gameplay mechanics on the App Store, the big three seem to be Dungeon & Coin, Coin Push Frenzy, and Coin Dozer. Each have their strengths and weaknesses, but they’re all free so you might as well just download them all if you’re remotely interested. All of the games work in a similar manner in that you start with an allotment of coins, you drop them in to the game, then you can either wait for your coins to recharge or you can buy more via an in-app purchase. 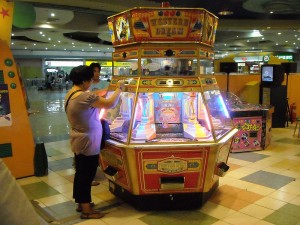 When you take a game like a coin pusher machine and compact it down to the iPhone, quite a bit is lost in translation. Coin pushing machines invoke the same emotion as gambling in that you could just be one coin away from starting a massive coin avalanche, or in the case of the video above, making a $5 bill drop in to the collection tray. This feeling is extremely difficult to duplicate with an iPhone game especially since all the prizes are virtual, and feel entirely meaningless in comparison.

Because of this, I really don’t recommend buying more coins in any of the games. Only having five coins left and strategically dropping them to try to get more is a lot more fun than I originally thought it would be, and having to wait to get more coins really makes you think about how you’re going to use the existing coins you have more. In comparison, once I bought a bucket full of coins as an in-app purchase for a couple bucks, I just started spamming them everywhere because I had so many. Managing a limited pool of coins is just much more fun.

Dungeons and Coin, Free An odd conglomeration of a coin push machine and light RPG elements. You battle monsters by pushing coins of the edge, and unlike the other two games, you’re not limited by the amount of coins you can chuck in at once– often resulting in hilarious coin explosions as the physics engine tries to figure out what to do.

Coin Push Frenzy, Free Packed with the best graphics and physics of the three, Coin Push Frenzy has a bunch of different power-ups, collectable prizes, and additional unlockable coin pusher machines. Currently there seems to be some bugs that effect coin generation, but Freeverse is aware of the issue and an update is on the way but in the meantime putting your device to sleep and waking it back up again should make coins appear.

Coin Dozer, Free Downloaded over 2.5 million times, Coin Dozer has been somewhat of a sensation in Asian App Store markets. With gameplay very similar to Coin Push Frenzy, I like that you can actually see what prizes are coming up instead of just spawning mysterious chests or boxes like the other two games.

I’ve been enjoying all three of these games much more than I thought I would when I first caught wind of them. Like all freemium games, they’re designed to be played randomly throughout the day, and it’s fun loading up the various games, dropping a few coins, and seeing what you get. If you remember staring at real coin push machines in the 80’s with wide eyes, dropping pocket full of coins and getting nothing but a few coins back, definitely give these games a try.