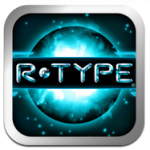 Originally released in 1987, R-Type [$1.99] is almost as classic as it gets when it comes to arcade shooters. Since its initial release, the game has seen many sequels, as well as ports to nearly ever platform ranging from the Amiga all the way up to the XBOX 360. Like most arcade games of the era, the game is framed in a vague story with the player piloting the space fighter Arrowhead to defend humanity from aliens. The original R-Type (and competent ports) have been well received by almost everyone, as the gameplay and level design are still considered by many to be among the best the genre has to offer. 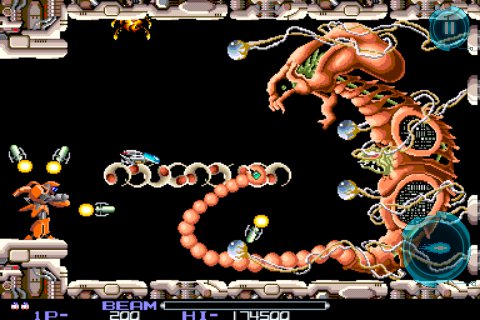 If you’ve never played R-Type before, you might be in for a surprise as the game’s notorious level of difficulty has landed it in lists such as IGN’s Top 10 Toughest Games to Beat. The levels are crafted in such a way that you likely won’t have much luck playing the game in a reactionary manner, and instead, will need to beat them through trial and error, learning the levels as you go. R-Type plays like what we now know as a typical shooter. You need to kill everything that moves, avoid bullets and enemies, fight massive bosses, all while collecting a wide array of power-ups on the way.

As far as the port is concerned, from a technical standpoint it’s great. To make things easier on new players there’s an unlimited mode with never-ending lives, as well as the standard normal difficulty and an unlockable insane difficulty. Three control options are included, touch controls which work like most other shooters where you drag your finger around the screen to move the ship along with tilt controls and even a virtual D-Pad. The virtual D-Pad is actually surprisingly cool too, as it changes the perspective of the game to look more like an arcade cabinet so your fingers don’t cover any of the action. Auto-fire can be enabled or disabled, and you can move the on-screen buttons to the right or left side in the options. 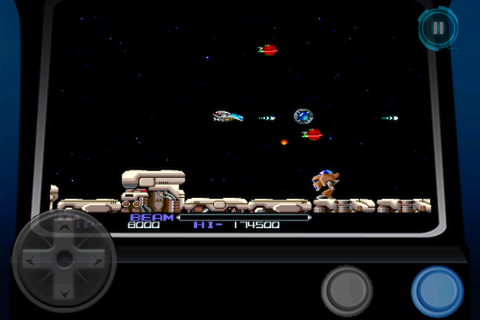 The developers really did everything they could do to bring a faithful port of R-Type to the App Store, but I’m really torn on how I feel with it. R-Type reminds me of last year’s Earthworm Jim port in that it’s hard to imagine a better port of the game, but the control constraints of the platform almost feel like it’s holding it back. Using your finger often obstructs the screen. Tilting feels off because your ship just moves at one speed regardless of how much you tilt. The virtual D-pad is good, but only as good as a virtual D-pad can be.

If you have fond memories of the original (or any of the ports), you’ll likely love having the game on your phone and will be able to make whichever control option you prefer work well enough to get through the game. Also, at $1.99 it likely is the cheapest way to play the game, since it would cost at least that in quarters at the arcade to make it through the first levels. If this review is the first time you’ve heard of R-Type, you might find yourself frustrated with the way things used to be with brutally difficult arcade shooters designed to extract every quarter from your pocket. In that case, you might be better off checking out some of the other more forgiving shooters that feature modern day conveniences such as far more checkpoints and far fewer game over screens.