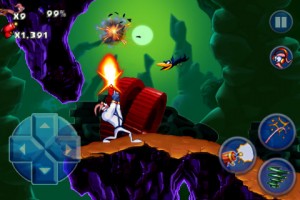 Earthworm Jim [App Store] is a game that should need no introduction if you are old enough to have been around to enjoy the golden age of 16 bit gaming. Originally released in 1994 for the Sega Genesis, and quickly ported to several other platforms shortly thereafter including the Super Nintendo and a “Special Edition" on the Sega CD. Recently this Sega CD version of the game made it to the Wii Virtual Console, and as of this evening Earthworm Jim has yet another new home– The iPhone.

So what’s Earthworm Jim all about? Well, you play as an earth worm (named Jim) who was powered up by a super suit that crashed down to Earth. Like all good video games, your quest involves saving a princess from her evil captor, in this case, Queen Slug-for-a-Butt. Along the way you’ll jump, whip, and shoot yourself through different obstacles and bosses in pure-16 bit platforming bliss. 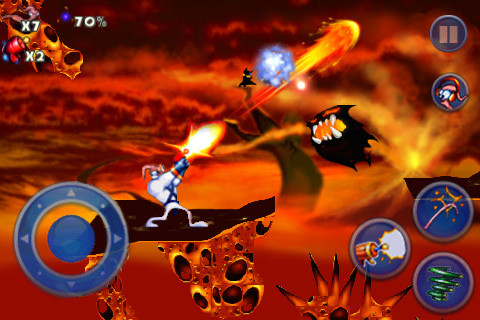 A virtual D-Pad (or joystick, configurable in the game’s options) controls your movement, and a set of three buttons in the opposite corner of the screen handle jumping and attacking. The controls work well enough for the game to still be fun, but if you remember playing the game on previous consoles, you will likely have a awkward adjustment period as you bumble through the first level.

If this is your first foray into the Earthworm Jimiverse, just be aware the game has numerous tiny platforms to jump on and airborne monsters to shoot. So, depending on how good you are with virtual D-Pads, this can either be very fun or very frustrating. 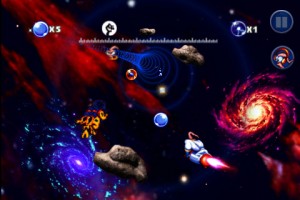 Between levels, Jim will take out his pocket rocket and you will race Psycrow (another one of the in-game baddies) to the next level. These levels play exactly like the tunnel racing games that have become so popular on the App Store. Tilting the iPhone moves your rocket right or left and you complete the level by beating Psycrow to the finish.

The odd part about these levels is they feel remarkably natural on the iPhone. Tilting right or left to move your rocket works just as well as all the other games on the platform with a similar racing gameplay mechanic. This provides a stark contrast between the regular levels of the game, which work, but feel just as out of place as most other games with virtual controls.

So do I recommend picking up Earthworm Jim? How could I say no? Earthworm Jim is a classic, and the iPhone port has completely remastered art and sound, making it quite possibly one of the best looking and sounding versions of the game. (Note that Jim does have different voice acting, so fair warning for you Earthworm Jim purists.) The controls are as good as can be expected, and the game only saves your progress as you complete each level, but Earthworm Jim for the iPhone can still be a lot of fun.

If you played the original release of the game, Earthworm Jim will stoke the coals of nostalgia in to a blazing inferno of worm whipping and rocket riding. If this is the first you’ve heard of the series, it still may be worth navigating the virtual control scheme to enjoy Gameloft’s refined version of one of the best platformers of the 90’s.