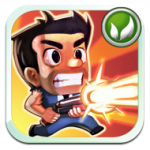 The wild popularity of Fruit Ninja [99¢ / HD] is a hard act to follow, but I think Halfbrick’s next game is more than up to snuff. In Monster Dash {99¢], you play as Barry Steakfries, a man who loves two things in life: Running and killing monsters. Of course I don’t know him personally, but I’ve been able to discern as much from spending the past week playing Monster Dash in almost every second of spare time I can find.

Monster Dash is a randomly generated survival platformer where you run to the right as long as you can, much like Canabalt [$2.99]. This is where the Canabalt similarities end, as between Barry Steakfries and wherever he’s running to is an array of monsters which all must be either avoided or slain. Barry’s default weapon is a shotgun, which has limited range, but along the way you will find weapon crates packed with sub machine guns, a powerful six shooter, and even a machine gun jetpack.

Barry’s life is represented in heart on the top right corner of the screen, and you can regain health by picking up heart power-ups on your run. Colliding with an enemy or hitting spikes causes you to lose health, and when you run out of hearts or miss a jump and fall to your death your run is over. From there, your score is submitted to OpenFeint online leaderboards, and you start again. On your run you will randomly warp through four different settings, from an egyptian world filled with mummies to the rooftop ruins following a zombie apocalypse.

Monster Dash is host to oodles of OpenFeint achievements and also a ridiculous amount of stat tracking, keeping count of things like your total distance travelled, how many monsters you’ve stomped, most consecutive stomps, and a bunch of other things. Also, not only is there a leaderboard for single run distance, but you can also compete for total distance ran, total monsters killed in one run, as well as total monsters killed overall. 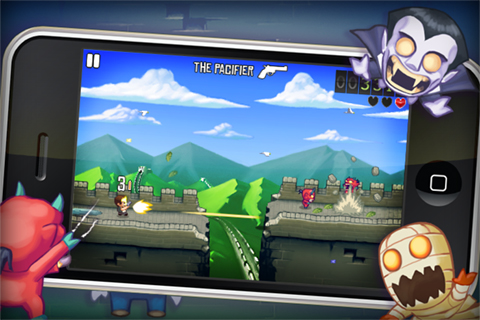 The graphics in Monster Dash consist of fantastically drawn sprites, and the fast paced music fits perfectly with the pace of the game. Overall, Monster Dash is just a ton of fun, the controls are simple and just consist of tapping either side of the iPhone screen to jump or fire, and I’m really having a hard time finding anything to complain about. Best of all, Halfbrick has had an amazing track record with updating Fruit Ninja with all kinds of additional game modes and content and all day people have been contributing their own ideas as to what would make Monster Dash even more awesome in the thread on our forums.

Halfbrick obviously hasn’t committed to implementing any of these things, but it’s not hard to imagine how well various power-ups and additional weaponry could fit in to the game. Regardless of whether or not these things ever happen, I’m happy as a clam with Monster Dash. If you like Canabalt-style gameplay and hate monsters, you basically need to download Monster Dash as soon as possible.