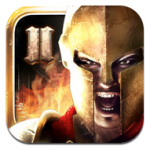 The original Hero of Sparta [$1.99 / Free / HD] was a technically innovative hack and slash adventure game released in late 2008 when the App Store was still in its infancy and large-scale 3D games were few and far between. In our review we called the original “visually impressive and fun". In the Hero of Sparta series, you play as Argos, a Spartan hero, who has to make his way through endless hordes of monsters. Much like the God of War trilogy which the Hero of Sparta series is heavily “inspired" by, along the way you’ll fight massive bosses, execute finishing moves via touchscreen quick action sequences, and eventually master the combo system to turn opposing enemies in to pulp.

Hero of Sparta II [$6.99] offers a significant graphical improvement over its predecessor and is packed with new powers and weapons to use while murdering everything that moves. If you enjoyed the first installment, it’s safe to say you will also have a blast with the second one as well. If you haven’t heard of the Hero of Sparta games before, give the lite version of the original game a spin to see how much you enjoy it.