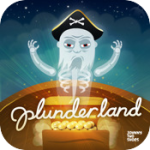 If you’ve ever had the desire to live the life of a dastardly pirate (and really, who hasn’t?), then the new game Plunderland [$2.99 from developer JohnnyTwoShoes gives you the opportunity to do just that. The game features sharp, colorful graphics that take advantage of the iPhone 4’s Retina Display and a mixture of touch and tilt controls that make it easy to wreak havoc on the open seas. Don’t let the cute graphics fool you however, as these pirates are vile to the core. With a simple pickup and play style, many interactive ways to dispatch enemies, an upgradeable ship, and some of the most charming visuals I’ve seen, Plunderland should satisfy your craving to loot and pillage.

Plunderland consists of left to right scrolling levels where you must collect as much loot as possible while dispatching anybody or anything that gets in your way. Your ship operates on a 2D plane and tilting the device moves the ship left and right. Touching the ship brings up the firing line of your cannon and moving your finger changes the trajectory of that line, with a shot being fired by letting go of the screen. An underlying physics system affects everything in Plunderland, and as such firing the cannon accurately in the heat of battle can be a bit imprecise due to the force of each blast throwing your ship off kilter. It’s a fairly minor nuisance though, and overall commanding your ship is a lot of fun. 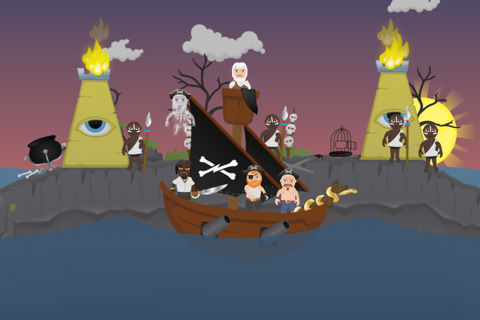 The neatest thing about Plunderland is how much interaction there is with the game world. Characters can be picked up, flung, drowned underwater, slammed into the ground, set on fire, and more. It’s very reminiscent of Pocket God [99¢, and is incredibly enjoyable in a sadistic way. Aside from messing with the British Army enemies and indigenous island inhabitants, you can also manipulate inanimate objects in Plunderland. My favorite method of dispatching enemy vessels is to wait for them to fire their cannon and then quickly snatch the cannonball out of the air with my finger and sling it back into their own ship. This usually causes more damage than using your own firepower, often ripping the enemy ship right in half. Needless to say, it’s hugely satisfying.

The underlying goal of Plunderland, besides just making it to the end of each level with your ship and crew intact, is collecting loot. This loot is obtained by destroying ships or structures, picking up the island natives and vigorously shaking it out of them, demolishing totem poles or tiki towers on the islands, or finding a treasure chest buried where you see an “X” marked in the ground. The loot that you collect can be used to upgrade your ship’s weapons and equipment, like adding a crow’s nest to be alerted of enemies sooner or a new ornament for the bow. The amount of money it takes to buy some of these items is quite large, and you’ll have to replay many of the levels in order to amass enough to buy everything. Luckily, the game is fun enough that replaying them isn’t a problem at all.

In the end, Plunderland is a great fit for the iPhone. The graphics are really appealing, especially on the iPhone 4’s screen, and the game just oozes personality. It will keep you plenty busy with 20 levels spread across three main campaigns and one survival campaign, as well as the many different upgrades to collect. There’s a distinct satisfaction to killing and pillaging innocent people, and then spending the ill-gotten money on your own selfish endeavors. Plus each level has bronze, silver, and gold levels of completion along with a hidden fish head to discover in each one. If you’ve been looking for something to appeal to your sadistic pirate side, look no further than Plunderland.