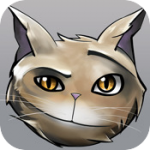 There are few things I like more than an iPhone game with an absolutely ridiculous premise that wouldn’t have a chance anywhere outside the App Store, except of course, when said game turns out to be a lot of fun. Such is the case with Cat Run [$1.99], a crazy conglomeration of classic line drawing control mechanics, Frogger-like traffic avoidance, and cats– Lots and lots of cats. In the game, you have to route cats from one side of the street to the other, avoiding traffic in the process as well as several other obstacles once you get to higher levels.

Touching a cat and drawing a line controls the path they take across the street, and arrows indicate which lanes oncoming cars will be driving down next. If you run in to problems, such as an unexpected car or a cat not going quite as fast as you were expecting it to, you can tap a cat to stop it, then draw a new line either back to the side of the street it came from, or on to the other side. Four different types of cats are included in the game, with each having slightly different characteristics such as speed and temperament. Learning the properties of each of the cats is important as you obviously need to allow for more time for the slower cats to get around cars, and you need to prioritize getting the aggressive cats across the street to avoid cat fights (which you need to tap to stop). 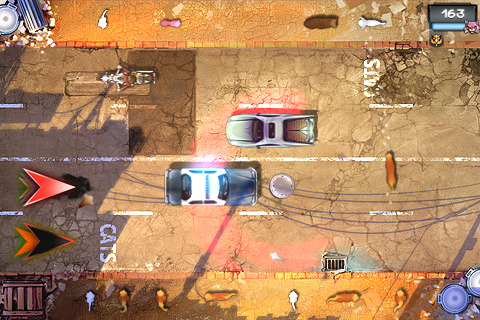 Cat Run includes some awesome obstacles you need to deal with as well. Obviously you don’t want your cats to get run over, but if a skunk appears, you get rid of it by drawing a path out in to traffic for it to get squished by a car. These skunks can also explode, which cause nearby cats to go crazy from the stench. That’s not all though, like any normal street there are sewers with manhole covers, which apparently are home to giant monsters who extend tentacles to grab your cats whenever the manhole opens up and one is nearby.

You can route your cats in four different environments, ranging from a normal street to space, and there are achievements linked to each. Cat Run also comes packed with OpenFeint for all kinds of OpenFeinty goodness such as online leaderboards, achievement tracking, and everything else. Scores are tracked both locally and globally for each environment, and like most games, the online leaderboards are already filled with scores that far exceed my capabilities.

Cat Run is a silly game that is a lot of fun to play. Perhaps my affinity to cats has something to do with it, but having cats flying all over your screen avoiding cars, while managing skunks, putting out cat fights, and avoiding mysterious tentacles is something I never saw myself doing in an iPhone game… Yet somehow, I’m incredibly glad that I finally am.