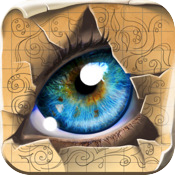 Every now and then the App Store divulges something that actually surprises me; a previously unheard of game design that sinks its claws into me before I even know it. From its outward appearance, Doodle God [App Store] seems less of a game and more of a periodic table gone wrong, an experiment only of interest to scientists of questionable sanity. It’s not until you experience it for yourself that you realise the true genius behind Doodle God’s alluring gameplay.

And elements don’t always bond as you believe they should; the developers employ a far more abstract thought process than a logical one in creating the Doodle God universe. So while combining earth and fire to create lava might be logical, the combination of fire and water into alcohol requires a greater stretch (and that is a tame example). Dare I say it, but God knows what needs to be added together to create a Wizard, of all things. 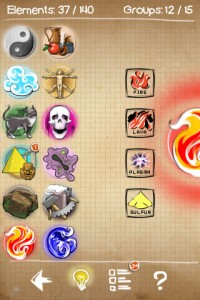 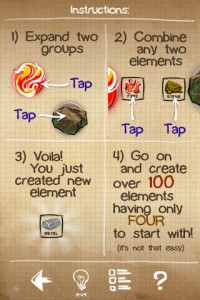 The end result is that what seems like a relaxing, thought provoking experience, is instead a manic adventure of ‘out of the box’ thinking, with many results and accidental discoveries evoking laughter just as often as they do sighs of relief as a piece of the puzzle is secured. Because while Doodle God doesn’t impose any time constraints on your discovery process, it will test the limits of your imagination and patience.

Elements are neatly categorised into 15 groups that are only made available when they are discovered. Pressing a group will open its list of elements to select from, displaying the groups again on the left of the screen. Selecting one of these groups will in turn display its list of available elements on the left. Choosing two elements from the selected groups will then attempt to fuse them together (if possible).

A successful bonding results in either a quirky or philosophical quote concerning the resulting reaction. Of course, chances are your selection won’t succeed (there are literally thousands of possible combinations, after all) and that’s where Doodle God’s nifty hint system comes to the rescue. Hints are doled out on a timer, so you never feel too bad resorting to that oft-needed light bulb. They take two forms; either showing a feasible byproduct to work towards, or showing two possible groups that have an available reaction.

If I had to put my finger on what specifically appeals to me about Doodle God, it would have to be that insatiable ‘just one more go’ pull, with the knowledge that some other inane discovery is just around the corner.

If you’re open to a new gameplay experience and not liable to just throw out a crazy concept from the get-go, then I recommend giving Doddle God a whirl. An online flash version is available to try first. And let your friends and family in on it too– you won’t be short a laugh or two, that’s for sure.