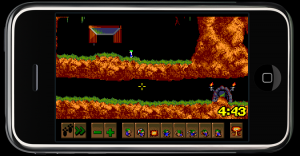 Last week we posted about Mobile 1UP’s Lemmings live blog, which was met with tons of enthusiasm both on our forums and in the comments of the actual story along with some very understandable skepticism that this unauthorized port would even see the light of day. Originally published by Psygnosis in 1991, the Lemmings franchise became part of Sony Computer Entertainment when Psygnosis was sold to Sony in 1993. Since then the game has been ported in one form or another to every Sony console, and with Sony’s latest online ad campaign targeting the App Store, their reaction to Mobile 1UP’s Lemmings isn’t entirely surprising.

Citing Joystiq, the cease and desist letter sent by Sony is viewable in its entirety on the Mobile 1UP blog. This isn’t entirely bad news, as even though the iPhone port of Lemmings is on hold for the time being, Mobile 1UP has posted in our forums that they’re going to try to open a dialog with Sony in attempt to arrange distribution rights to legally bring Lemmings to the App Store. Unfortunately, the licensing costs involved likely means Lemmings will no longer be free as originally intended.

We’ll keep a close eye on the drama between Mobile 1UP and Sony, but in the meantime, I’m just keeping my fingers crossed that a real Lemmings game makes it to the App Store sooner or later.