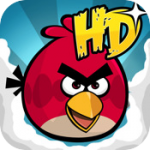 Back at E3 we first heard rumblings from Rovio regarding finally updating the iPad version of Angry Birds [iPhone: 99¢ / Free – iPad: $4.99]. It landed on the App Store not too long ago, bringing a bucket full of content that owners of the iPhone version have already been enjoying.

These additions include the new boomerang bird, 45 new levels across 3 different themes, golden eggs, some new menus, and Crystal updates with new achievements. Of course, we’ve still yet to really see any iPad specific feature that makes the HD version worth picking up other than higher resolution graphics, but we’re always keeping our fingers crossed for something cool coming in the future.

If this is the first you’ve heard of Angry Birds, and haven’t been curious enough to download it after seeing it at or near the top of the iTunes top ten charts for quite some time now, take a look at our review. Angry Birds is a catapult game where you fling one of an array of different birds, each with a unique ability, at a set of pigs on the opposite side of the screen. With an excellent physics engine, Angry Birds is a game of precision and planning as you fling each bird to decimate the opposing pig forces.

The iPhone version is highly recommended, but until they implement some iPad-specific feature set that set it apart from its 99¢ counterpart aside from higher resolution graphics, I’d just stick with running the iPhone version at 2x. Of course, if you already own the HD version, don’t waste any time mashing “Update" in iTunes. There have been some reports of the new update crashing in the Angry Birds HD thread in our forums and Rovio posted suggesting to reboot your iPad if you have issues. I haven’t run in to any problems myself, but it’s just something to be aware of.