Parked outside the west hall of E3 this year was a black party bus covered in Gameloft logos and graphics from their latest games. Inside they walked us through a few games that are nearing release, and a few others that are coming soon. The star of the show was Ultimate Spiderman Total Mayhem, a 3D beat ’em up obviously based in the Spider Man universe with an art style straight out of the Spider Man comic books.

Available sometime towards the end of this summer, Ultimate Spiderman is controlled like all third person Gameloft games, with a virtual joystick that controls your movement and a set of buttons that handle your punching, web slinging, jumping, and other actions. As you fight more guys, an energy bar increases below your health that allows you to unleash an “ultimate combo" which sends Spider Man in to a web-spinning frenzy, damaging everything on screen. 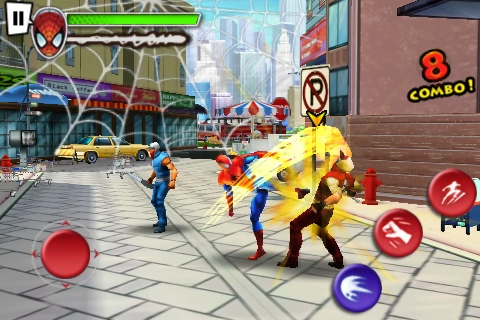 The demo Gameloft was willing to show was fairly brief, but I did get a chance to fight a whole mess of bad guys, fight a mini-boss of sorts, and even experience a few quick time events where your spider sense kicks in to do things like avoid falling obstacles. The first level included everything you would expect in a Spider Man game, fighting on streets, climbing up a building, and finally hopping from roof top to roof top.

The second level they showed involve quite a bit of web slinging. Vaulting yourself forward and swinging between buildings is interrupted by a seemingly constant stream of incoming missiles which using your spider sense you can avoid and leap off of. Overall, both levels were pretty cool, but like quite a few recent Gameloft games, the various gameplay components that make up Ultimate Spiderman all feel transplanted from other titles. Fighting had almost had a Hero of Sparta [$1.99 / Free] feel to it with spider webs mixed in, controlling Spider Man felt a lot like controlling Iron Man in Iron Man 2 [$6.99 / Free], and there was even some rail sliding portions that reminded me of the exact same segments from Avatar [$6.99]. 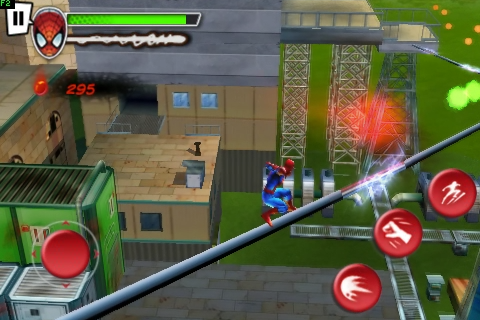 This isn’t entirely bad, as if you haven’t played these other games all the things that make up Spider Man will seem to go together very well– But, if you have been playing every Gameloft release, it will be very apparent that you’re just playing another conglomeration of Gameloft gameplay mechanics with a Spider Man skin on top. Hopefully when the game is finally released it will include a bit more to set it apart from other Gameloft games aside from the Spider Man license.

Other Gameloft games included Hero of Sparta 2, which picked up where the original left off with you going back to attempt to lift the curse from your homeland and go head to head with Hades. Launching for both the iPhone and iPad, Hero of Sparta 2 will likely be an easy purchase for anyone who enjoyed Hero of Sparta, as the game offers more of the same but this time with substantially better looking graphics.

Let’s Golf 2 is also in the works, and just like Hero of Sparta 2, it’s Let’s Golf with even more holes (108 in total), more playable characters, more stuff to unlock, and better looking graphics across the 6 included environments. I had a great time with Let’s Golf [$1.99 / Free], which is incredibly apparent in our review from last year and it’s actually still my favorite golf game for the iPhone. I’m really looking forward to Let’s Golf 2. 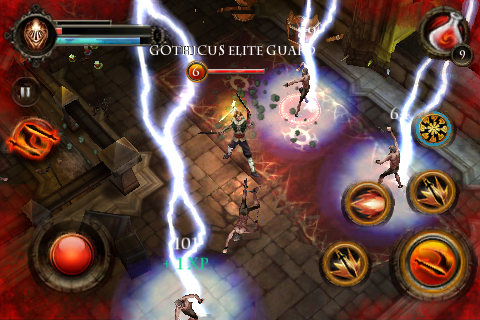 Other than that, a bunch of Gameloft games which don’t have iPad versions are getting upscaled to HD releases. These include Splinter Cell Conviction [$9.99], Blockus [$4.99], and The Settlers [$4.99 / Free]. Each game is basically the same as the iPhone version with higher resolution graphics with the main exception being Blokus which is coming loaded with single device multiplayer.