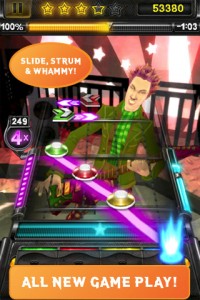 As promised during yesterday’s keynote address, Activision released an official version of Guitar Hero for the iPhone and iPod Touch yesterday.

The game costs $2.99 and comes with 6 songs with additional song packs available as in-app purchases. The included songs include:

Despite the rather short tracklist, impressions have been positive with particular praise for the game’s fun notecharts:

Gotta say i’m pretty impressed thus far. Much better than I expected and way deeper, more challenging and fun than Rockband. I really like the variety in the gameplay created by the slides and “strums" – it adds a lot of challenging segments and can be much more interesting than the somewhat stagnant note charts from TTR3/RB.

More feedback and impressions are available in our discussion forums.