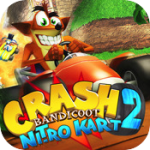 , Crash Bandicoot Nitro Kart 3D by developer Polarbit was amongst the first batch of games released onto Apple’s fledgling App Store. At the time, it was an impressive example of what could be achieved on a mobile phone, and glimpsed at a bright future for iPhone gaming. Looking back on it today, however, the decidedly lackluster graphics, stuttering framerate, and deplorably short draw distance mar the otherwise very enjoyable gameplay. It’s still a good game, but in the time since its release a number of competing kart racers like Shrek Kart and Cocoto Kart have raised the bar considerably in terms of graphics and notable features like online multiplayer. Now, Polarbit has reentered the fray with a sequel that – for the most part – addresses the downfalls of the original, delivering a largely familiar but wholly expanded upon experience with Crash Bandicoot Nitro Kart 2.

The most immediately noticeable improvement in Crash 2 is the visuals. The scenery is detailed and brightly colored, and thankfully the dreadful draw distance of the first game is nonexistent. The levels are cleverly designed with multiple pathways, varying track elevations, and many different shortcuts waiting to be discovered. The character and kart models are notably better this time around, consisting of a higher polygon count and much more detail and personality. The framerate can still get choppy when there is a lot of action onscreen at once, but it’s hardly ever bothersome and is significantly better than the original’s. The load times are a bit long, and the audio can stutter while loading on occasion. Some users are reporting the game crashing, although this was infrequent in our time with the game. Also of note is the excellent music and sound effects throughout that bring the game to life without ever feeling overbearing. 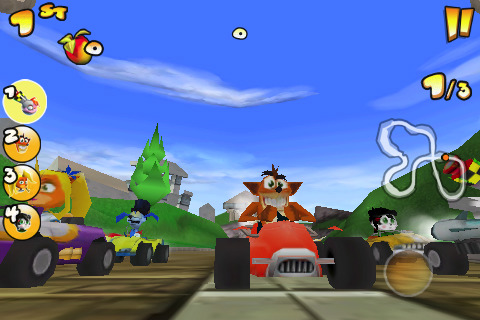 Gameplay-wise Crash 2 features the familiar drift-heavy, combat-intensive racing found in its previous iteration, as well as most every other kart racing game since the inception of Super Mario Kart. It’s a proven formula that’s executed quite well here, but can be highly unforgiving. One wrong turn or attack from an opponent can cost you an entire race, but this can work to your benefit too, allowing you to come from behind and still win. It can end up being frustrating to race near perfectly only to lose at the very last stretch of track because someone launched a missile into your backside. This is par for the course in games like this, however, and the frenetic fun outweighs the frustration. Touch or tilt controls are available, and while the tilt felt a little more comfortable I found the touch option allowed for more finesse while turning. The controls are really responsive, and either option should be suitable for most people.

The number of different game modes in Crash 2 is quite impressive. The standards are here, such as Arcade, Time Attack, Cup races and more, but some others that offer more non-traditional racing. For example, Mission Mode presents one specific objective for each of the 12 courses. You may need to accumulate a certain amount of points by drifting, or collect a number of different items, all while still placing 3rd or better in the race. These different modes offer a fun way to play through the game’s content while staying fresh and engaging, although sometimes the requirements to complete them can be brutally difficult. There’s a total of 10 characters, 12 courses, and 8 modes in Crash 2, the majority of which are unlocked as you progress through the game. 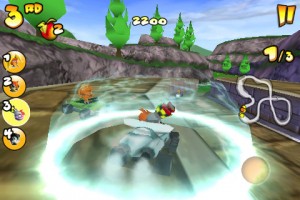 One standout feature is the ability to race online against players from all over the world. It works incredibly easily, as you just type in a username and connect to a lobby showing available rooms to join. You can create your own room as well, and as host can pick which mode and track to play. The types of online games are standard races, knockout-style Eliminator mode, and Collection where the goal is to be the racer who collects the most crystals by the end of the race. Our experience racing online worked well and was relatively lag-free, and adds a tremendous amount of replayability to the title.

In the end, Crash 2 is just what you would expect out of a sequel. They’ve taken all of the great elements of the first game, refined them, and added a ton more content on top. If you were a fan of the original game, then you should no doubt enjoy this one even more. If you have yet to pick up one of the many kart racers on the App Store, then Crash 2 is likely your best option. It feels as close as you can get to something like Mario Kart DS on this platform. The overly difficult challenges and somewhat cheap combat mechanics will likely frustrate some more than others, but overall the game is a lot of fun. With a ton of content, beautiful graphics and presentation, excellent online play, and the pedigree of one of the App Store’s first classics, Crash Bandicoot Nitro Kart 2 is definitely recommended.